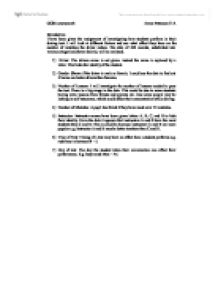 I have been given the assignment of investigating how students perform in their driving test. I will look at different factors and see what effect they have on the number of mistakes the driver makes. The data of 240 records, subdivided into various categories (shown below), will be analysed.

It would take on average 40 lessons for a student to pass their test. This indicates that lessons are nearly not worth while because lessons can be about £50 each. It would cost the average person learning to drive, about £2000, which is a large sum of money, especially for students.

In the data, some of the driver’s are missing their “number of mistakes”. I will use my formula to fill in some of this missing data:

Hypothesis 1 (“The more lessons taken by a pupil the fewer mistakes they make in the test’) is correct. This means that my prediction also correct.

I feel that gender would be a big factor. I think that females benefit more from lessons than males, because females in general, are more nervous and lessons would boost their confidence more than males. For hypothesise 2, I am going to investigate gender to see if females need more lessons than males.

Females will benefit more from lessons than males.

I think that females will benefit lessons more because females are more nervous and lessons would help them to become more confident. I will draw two graphs, one for males and the other for females, to work out what gender benefits lessons the most. I am expecting that there will be a negative correlation in the scatter graphs and that the correlation will be stronger in the females’ trend line compared to the male’s trend line on the scatter graph.

When working with number of mistakes and number of lessons, I came up with the idea that gender might have an effect, therefore I brought forward hypothesis 2.

Females will benefit from lessons more than males was my 2nd hypothesis. I thought that females would benefit more from lessons because females are more nervous and lessons would help them to become more confident. This turned out to be incorrect. Males benefited more than females. I was shocked to find that it would take 200 lessons for the average female to pass the test.

Depending on what instructor a pupil gets, can have an impact on whether a pupil passes their driving test.

I finished in stating that my hypothesis 3 was correct and that I was correct in saying that for the majority of the instructors, males will perform better than females. Males performed better than females for 3 out of 4 instructors. I considered this because males in general, can be more out going and are more confident than females. Instructor A turned out to be the best instructor for both genders (72% of male pupils passed and 74% of females passed). However driving instructor A was unusual because females had a better pass rate than males.

If I were to do this investigation again, I would have a larger amount of data to make this investigation more reliable. I would also add more specific details, such as “the gender of instructor” , “month driving test was taken”, “cost of lessons”, “how long lesson lasts” and “how long did driver practice for test”  These factors would help me investigate in more depth.