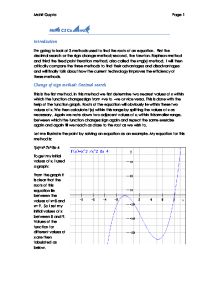 Maths C3 Coursework Introduction I'm going to look at 3 methods used to find the roots of an equation. First the decimal search or the sign change method; second, the Newton-Raphson method and third the fixed point iteration method, also called the x=g(x) method. I will then critically compare the three methods to find their advantages and disadvantages and will finally talk about how the current technology improves the efficiency of these methods. Change of sign method: Decimal search This is the first method. In this method we first determine two nearest values of x within which the function changes sign from +ve to -ve or vice versa. This is done with the help of the function graph. Roots of the equation will obviously lie within these two values of x. We then calculate f(x) within this range by splitting the values of x as necessary. Again we note down two adjacent values of x, within this smaller range, between which the function changes sign again and repeat the same exercise again and again till we reach as close to the root as we wish to. Let me illustrate the point by solving an equation as an example. My equation for this method is: f(x)=x3-7x2-8x-4 To get my initial values of x, I used a graph: From the graph it is clear that the roots of this equation lie between the values of x=8 and x= 9. ...read more.

I started with this value to get the root. For the other two roots I used x = -2 and x = -9 There are situations where this method does not work. An example of such an equation is f(x) = x0.2+x0.16-1. The first two tangent lines have been added with my initial value x0 =1. As you can see, the tangent lines instead of converging towards the root, are diverging away from it. Fixed Point iteration (x = g(x)) The final method I'm going to look at is called fixed point iteration or x=g(x). This method is based on re-arranging the equation f(x) = 0 to x = g(x) format. It is then obvious that the root of equation f(x)=0 will satisfy the condition n=g(n) if n is its root. As in earlier methods, we then select a value of x, say x', close to the root of the equation and substitute x' for x in the function g(x). As x' is not a root of f(x), the resultant value of g(x), will not be x' but say, x" and x" will then be x"=g(x'). We then repeat the process by substituting x" for x in g(x)=x and keep doing the same until you feel satisfied, you are close enough to the root or actually on the root. When the root is found then every step afterwards gives nearly the same root as at that point x = g(x). ...read more.

This can be very effective with any simple equation for which the derivative can be found quite easily and fast of a simple equation which can be applied in the formula. The fixed point iteration requires you to re-arrange the equation to get it in the form x = g(x), which could be a problem if it was a complicated equation. The part where you turn it into an iterative one is however simple and quick. The final part, just plugging it into the computer is as always, very quick. The only real problem in this method lies with the re-arrangement of the equation, but after that, it's quite simple. The downside to this method, is that it requires a certain gradient of the curve y = g(x) at the point of the root. If the gradient at the point of the root is not between -1 and 1, then the method has a small chance of succeeding to find the root. Overall, these days with advanced computers , calculations can happen fast. The only part that slows these methods down is the requirement of a human mind in a few key stages of each method. The complexity of the equation affects this as a more complex equation usually takes longer for the human brain to process. ?? ?? ?? ?? Mohit Gupta Page 1 ...read more.