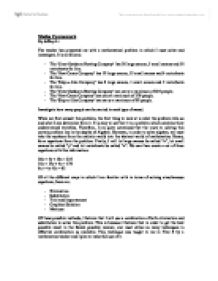 Maths - Investigate how many people can be carried in each type of vessel.

The teacher has presented me with a mathematical problem in which I must solve and investigate. It is as follows:

Investigate how many people can be carried in each type of vessel.

When we first consult this problem, the first thing to look at is what the problem tells us and what I can determine from it. It is easy to see that it is a problem which contains three undetermined variables. Therefore, I am quite convinced that the route to solving this certain problem lies in the depths of Algebra. However, in order to solve algebra; we must take the numbers from the realistic world into the abstract world of mathematics. Hence, form equations from the problem. Firstly, I will let large canoes be called “x”, let small canoes be called “y” and let motorboats be called “z”. We can then create a set of three equations with this information:

Of all the different ways in which I am familiar with in terms of solving simultaneous equations, there are:

The 20 and 10 are positive while the 5 is made negative. The value of ‘A’ can then be found by cross multiplying the numbers in each matrix and subtracting. Thus:

The next step is to find the value of [A]T  or transpose by simply rewriting the rows as columns:

We must then invert the corresponding signs of the integers using this shape:

The final result is:

We now know that A-1 is equal to the above result. Since we know that X = A-1B. We can now substitute the numbers we know back into the equation now that we are aware of what the values of A-1 and B are.

The two matrices on the right hand side of the equation are then multiplied together:

Thus, the final equation is:

And thus, the answers are revealed:

We then move onto the next stage and find A transpose by rewriting its rows as columns and then finding the co-factors:

Note: negative (BI-CH) has simply been multiplied by -1 and changed to (CH-BI) as have with other signs that need to be inverted. Now we simple multiply J, K and L into the brackets and create a solution of:

I believe that overall, I have managed to investigate this problem as much as I can at this stage. I have solved the problem using two methods, investigated new methods of mathematics that I had never encountered before and also produced a mathematical formula that will solve almost any simultaneous equation with three pieces of information and three variables. However – I have noticed that there is a flaw to the general formula. Should the denominator to any of the general formulas = 0. And since it is impossible to divide by 0, there would be no solution to the problem using the general formula and the answer would have to be located using an alternative method. From this coursework, I believe I have learned a lot and it feels highly satisfying to finish it in the end.