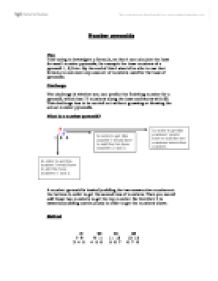 I am trying to investigate a formula, so that I can calculate the base for small number pyramids, for example the base numbers of a pyramid 1, 2,3 etc. By the end of this I should be able to use that formula to calculate any amount of numbers used for the base of pyramids.

The challenge is whether you can predict the finishing number for a pyramid, which has 17 numbers along the base and starts with 23. This challenge has to be carried out without guessing or drawing the actual number pyramids.

What is a number pyramid?

Once I have put the results in a table, I can analyse them carefully and work out a general formula. If you look at the first number column, you will be able to notice that they go up by 1, and the top number column goes up by 4. So therefore, if you add any first number to any last number and then multiply it by 2, you will get the top number. In that case, my formula is as follows: -

By using this formula I can calculate any first, last and top number.

However, now to work out a general rule, I will use the following table to distinguish this.

However, if I were to do this using algebra, I would have the letter ‘B’ as my base number to represent any number and the power form would be 2B-2

So therefore my general formula is: -

Now in order to test my general formula, which is as follows:-

I will use the number pyramid below, to prove that my formula functions correctly.

By viewing the above calculation, you will have noticed that my general formula works, so therefore the answer to the three-based pyramid above is proved correctly as 12.

After proving my general formula, I have now presented the formulas for each base pyramid.

have to take away 2 each time.

Now, that I have calculated the difference of 3, by applying the three base numbers, I will now predict how the formula will look like for the 6 based pyramid. The formula will appear something like the following: -

However, now in order to prove my formula, I will substitute the formula into the six-based pyramid.

By observing the above calculation, you will notice that my formula for the six-based number pyramid is correct.

Now, in order to work out a general formula for the differences of 1, 2, 3 and 4, I will use the following table, to input the formulas.

By studying the table above, you will notice that 2F stays the same and the number you are adding on each time goes up by 1. However though the rest of the formula stays the same.

As I have already distinguished a pattern for this, I will now calculate a general formula, using algebra.  The formula is as follows:

Now in order to prove this formula, I will use the following number pyramid, which has a base of three.

By looking at the formula above, you will have noticed that my calculations are correct, as the top number of the three based pyramid is equal to 8, which is the same, when I did the substitution.