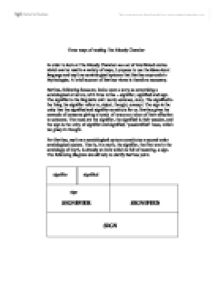 In order to look at The Bloody Chamber as a set of interlinked stories which can be read in a variety of ways, I propose to use the ideas about language and myth as semiological systems that Barthes expounds in Mythologies. A brief account of Barthes views is therefore necessary.

For Barthes, myth as a semiological system constitutes a second order semiological system. That is, in a myth, the signifier, the first tem in the semiology of myth, is already an item which is full of meaning, a sign. The following diagram should help to clarify Barthes point.

It may be easier to understand with an example.

A first order reading of the title story of The Bloody Chamber, similar to the one offered by Darnton of Red Riding Hood is also both possible and plausible. In this story, a much older, sexually experienced man marries a young woman, barely an adult, who is sexually inexperienced and perhaps naïve. He turns out to have rather predatory designs upon her. The meaning of the story, at the first level would then be quite simply, for inexperienced 18 year old women to be sceptical about the intentions of sexually experienced men old enough to be their fathers. Their intentions are probably not centred around companionate marriage and romantic love. This is a perfectly legitimate way in which to read the story, as a warning. Read this way it is precisely the sort of warning that the 18 year old Dianna Spencer could well have profited from before marrying the 40 year old, sexually experienced and emotionally jaded Charles Windsor and embarking upon her preordained role as a symbol of emotional victimhood.

This helps us defuse certain feminist reservations about the story The Bloody Chamber. A post-modern reading achieves a certain ‘ironic’ distance from the sort of interpretation that feminist find problematic, without supplanting that interpretation. It is as though the writer and reader acknowledge that there is something problematic and a knowing look passes between us, neither endorsing nor contesting that problematic interpretation, but acknowledging the ‘distance’ that our inability to accept, even at the mythic level, that the signifiers of problematic female passivity can stand simply and innocently for that very thing, female passivity.

In that respect, since there is no definitive ironic stance, the reader is the determinant of the meaning of the story. Irony of this kind is a negative stance it isn’t an endorsement of any particular reading, rather a rejection of the simple and innocent one. What the reader then makes of it is left up to them.