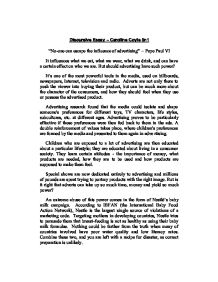 Discursive Essay - Caroline Coyle 5n1 "No-one can escape the influence of advertising" - Pope Paul VI It influences what we eat, what we wear, what we drink, and can have a certain effect on who we are. But should advertising have such power? It's one of the most powerful tools in the media, used on billboards, newspapers, Internet, television and radio. Adverts are not only there to push the viewer into buying their product, but can be much more about the character of the consumers, and how they should feel when they use or possess the advertised product. Advertising research found that the media could isolate and shape someone's preferences for different toys, TV characters, life styles, subcultures, etc. at different ages. Advertising proves to be particularly effective if these preferences were then fed back to them in the ads. A double reinforcement of values takes place, where children's preferences are formed by the media and presented to them again in advertising. ...read more.

Combine these two, and you are left with a recipe for disaster, as correct preparation is unlikely. IBFAN produced a report that also saw Nestle sending sales staff dressed as nurses to promote their milk in hospitals, as well as giving away free samples. Obviously ethics played no part in their promotional strategy. It may also be said to be socially irresponsible to advertise tobacco and alcohol when both of these harmful drugs can kill easily. Ethics do not seem be present when advertisers are promoting products that are widely known to cause cancer or liver damage. Advertising reaches all audiences, but may affect impressionable children and self-conscious adolescents more than adults. Although banned from TV advertising, the tobacco industry has creatively financed the print media to the extent of 3.27 billion per year. Tobacco advertising may no longer be viewed on television, but with facts like the previous of billions of pounds being spent on print media, it is clear that the industry will not give up on its advertising. ...read more.

Users should practice moderation and discipline in their approach to the mass media." I think that adverts really do have a tremendous influence on the way people govern their lives, and some of them are not as moral as would be desired. It is all too common to see sex selling products in ways that has absolutely nothing to do with the products themselves. Roderick White, an author states that "The majority of advertisements, mirror society. It is however, generally a distorting mirror. As a result, society looks at what it sees in the glass, does not like it, and with a certain justification blames the mirror." I agree with this statement, and feel that what comes out of the screen comes out of the community and society; it has no-where else to come from. Yes there are a great percentage of unethical ads, but we as a nation have all become so passive about them, that really, no one knows, or has concerns about this issue. Until people realise the control and power advertising holds, then they will continue to subconsciously take it all in, including all the immoral and unethical ideas it can portray. ...read more.