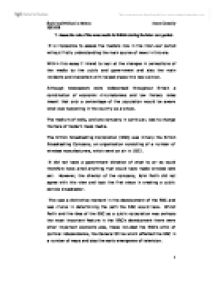 7. Assess the role of the mass media in Britain during the inter-war period

7. Assess the role of the mass media in Britain during the inter-war period. It is impossible to assess the media's role in the inter-war period without firstly understanding the main source of news in this era. Within this essay I intend to look at the changes in perceptions of the media by the public and government and also the main incidents and characters with helped shape this new opinion. Although newspapers were widespread throughout Britain a combination of economic circumstances and low literacy rates meant that only a percentage of the population would be aware what was happening in the country as a whole. The medium of radio, and one company in particular, was to change the face of modern mass media. The British Broadcasting Corporation (BBC) was initially the British Broadcasting Company, an organization consisting of a number of wireless manufacturers, which went on air in 1922. It did not have a government dictation of what to air so could therefore have aired anything that would have made wireless sets sell. However, the director of the company, John Reith did not agree with this view and took the first steps in creating a public service broadcaster. This was a distinctive moment in the development of the BBC and was crucial in determining the path the BBC would take. Whilst Reith and the idea of the BBC as a public corporation was perhaps the most important feature in the BBC's development there were other important elements also, these included the BBC's ethic of political independence, the General Strike which affected the BBC in a number of ways and also the early emergence of television. ...read more.

The General Strike of 1926 was extremely important in the BBC's development in a variety of different ways. The General Strike "shook the structure of the existing BBC to its very foundations." (Boyle, 1972, p178). The Strike increased the number of the BBC's listeners, allowed the BBC to consult its own news sources, saw the beginning of modern propaganda and saw the BBC start to censor itself. These factors lead the BBC to emerge from the strike with, "A national audience and increased authority."(Curran and Seaton, 2003, p.117). It was also after the General Strike that the BBC's, "ethic of political neutrality" (Curran and Seaton, 2003, p.119) appeared. The General Strike increased the BBC's importance dramatically. With the print workers unionized and not working, the BBC staff, who was not in unions, carried on broadcasting and, with the absence of other sources of news, this became the main national news source (Briggs and Cobley, 2002, p.449). Although there were perhaps only 2 million licence holders, this far underestimates the number of people listening to the BBC during the time as "communal listening" was a recognised feature of the strike, when people gathered together to listen to the news. (Curran and Seaton, 2003, p117). The power that the press held prohibited this and also placed restrictions. News bulletins, for example, were only allowed to be broadcast in the evening so as to not harm newspaper sales. (BBC, 2004). Until 1926 the BBC had not collected news from sources of its own. ...read more.

The most important developments came under the leadership of the first director of the corporation, John Reith. His belief in high moral standards being linked with high broadcasting standards resulted in the set of 'Reithian principles' that the BBC is still bound to today. The standards and beliefs he strived to implement along with the invention of the licence fee resulted in the BBC becoming a public service broadcaster and therefore shaped the way the BBC was run in the most important way. This lead the BBC to adopt its ethic of political impartiality, resulting in an unbiased news service which the public felt it could trust. The General strike also proved to be distinctive in the development of the mass media for a number of different reasons. It was during the strike that the audiences grew dramatically increasing the importance and the power of the BBC extensively. The General Strike also indicated the first point that the BBC was allowed to have its own news service and didn't rely on other sources, as well as having to censor itself in order to avoid interventions by the government. The role of the media in Britain at this time is inextricably linked to the BBC. It is impossible to discuss the roles of both independently as the BBC was the only mass media in Britain at this time. The BBC took on the role of the impartial but moral observer in a way which no media had done before and reached out to the people of Britain. To this day Britain is renowned for the BBC and the role it played in the history of modern media. ...read more.