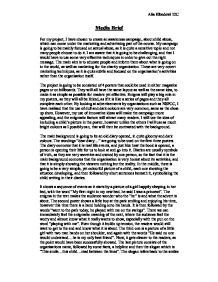 A brief for an awareness campaign

Media Brief For my project, I have chosen to create an awareness campaign, about child abuse, which can come under the marketing and advertising part of the course. My campaign is going to be mainly focused on sexual abuse, as it is quite a sensitive topic and not many people choose to do it. I am aware that it is going to be challenging, and that I would have to use some very effective techniques in order to give out the right message. The main aim is to educate people and inform them about what is going on in the world, as well as marketing for the charity organisation. These are very covert marketing techniques, as it is quite subtle and focused on the organisation's activities rather than the organisation itself. The project is going to be consisted of 4 posters that could be used in either magazine pages or on billboards. ...read more.

It shows a sequence of events as it starts by a picture of a girl happily sleeping in her bed, with the word "My first night in my new bed. he said I was a princess". The enigma in the text makes the audience wonder who the "he" is and what the advert is about. The second poster shows a little boy at the park smiling and enjoying his time, however this time there is a hand holding onto his hands. It is then followed by the words "went to the park today, he played with me on the swings". There we can immediately feel the enigmatic meaning of the next, where the audience feel the worry and almost know what it really wants to show, especially with the pun on the word "playing with me". Even though it builds up tension, the readers would still want to get to the end and know what it is about. ...read more.

So overall it appeals to both ABC1 and C2DE audiences, with a very wide range, starting from young children to old grandparents both reporting the same problem. The billboards are going to be created using the same pictures, however with all of them stitched together, making it seem like a storyboard. It could be placed anywhere, however it would be best put at a place such as a shopping centre where viewers can stand and read all of the writing. Stickers are also going to be created with the logo of the campaign and distributed around. I am working in a pair with Kirstie Browne, and we have both decided to equally divide the work, and use a program called "Easy media creator 10 Suite" to help us create our posters, and make them seem professional. We will start by taking the pictures we need on digital cameras then use them for our final piece. The organisation that we will most probably choose is going to be "NSPCC" as it is mainly focused of the sexually abused children. ?? ?? ?? ?? Alia Elbedewi 12C ...read more.