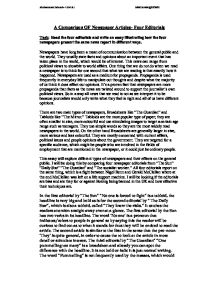 A Comparison OF Newspaper Articles- Four Editorials Task: Read the four editorials and write an essay illustrating how the four newspapers present the same news report in different ways. Newspapers have long been a mean of communication between the general public and the world. They usually state facts and opinions about an important event that has taken place in the world, which would be of interest. This news can range from political views to showbiz to world affairs. One thing that we do not do when we read a newspaper is to think for one second that what we are reading is that exactly how it happened. Newspapers are used as a medium for propaganda. Propaganda is used frequently in everyday life to manipulate out thoughts and despite what the majority of us think it does affect our opinions. It's a proven fact that newspapers are more propaganda than facts as the news are twisted around to support the journalist's own political views. So in a way all news that we read is not as we interpret it to be because journalists would only write what they feel is right and all of us have different opinions. ...read more.

The first article starts of with a fact but the writer then goes on to express his own views and therefore it is mainly opinions. For example "why should boxing be banned when all those sports continue?" and words such as brutal" and "cruel" are used to describe the event, which affects the reader's emotions, making an incident where blood was involved come to their minds. On the other hand The Guardian newspaper provides a lot more detail with static's. For example " Britain's boxing rules have been tightened for over 300 years since the first bare knuckle fight was recorded". The Guardian has used longer sentence structure in comparison to the other newspapers, the words are generally long and more than three syllables long for example words such as "neurological" are used, which is quite typical of a broadsheet newspaper as it has so much facts and uses complex vocabulary that it is only served for the needs of intellectual people. All the other newspapers are tabloids so they have used short sentence structure and short words for example is article two the longest word is "endeavour" where as that would probably be the longest in a broadsheet. ...read more.

This author wants the class-dive system changed as he clearly outlines it in his last sentences "The real question is not whether boxing should be banned but whether we can rid of the system which creates it." Coming to a conclusion I would say that the best newspaper which is more likely to make people think is "The Socialist Worker" as it would than be a need for one to understand the importance of society and how our we exploit it. After that has been done, than, you could start thinking about different other issues. My own opinion is that boxing should not be banned even after knowing the tragic consequences. I think that if you were to ban boxing there would a lot of unrest and protests so therefore the best way of preventing that is to allow boxing. If people are sane they will know the consequences of boxing and yet if they still want to continue we cannot stop them they have free will but they were warned. So if you allow boxing this way the decision is theirs (boxers) not anyone else's and only they can be blamed for their actions. ?? ?? ?? ?? Mohammed Shuaib- 11NGO Media assignment ...read more.