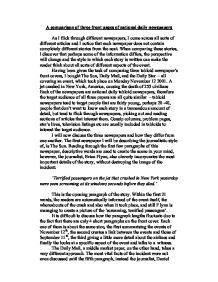 A comparison of three front pages of national daily newspapers

A comparison of three front pages of national daily newspapers As I flick through different newspapers, I come across all sorts of different articles and I notice that each newspaper does not contain completely different stories from the next. When comparing these stories, I discover that perhaps some of the information differs, the perspective will change and the style in which each story is written can make the reader think about all sorts of different aspects of the event. Having been given the task of comparing three tabloid newspaper's front covers, I bought The Sun, Daily Mail, and the Daily Star - all covering an event, which took place on Monday November 12 2001. A jet crashed in New York, America, causing the death of 255 civilians Each of the newspapers are national daily tabloid newspapers, therefore the target audience of all three papers are all quite similar - tabloid newspapers tend to target people that are fairly young, perhaps 20-40, people that don't want to know each story in a tremendous amount of detail, but tend to flick through newspapers, picking out and reading sections of articles that interest them. Gossip columns, problem pages, star's lives, television listings etc are usually included in tabloids to interest the target audience. I will now discuss the three newspapers and how they differ from one another. The first newspaper I will be describing the journalistic style of, is The Sun. Reading through the first few paragraphs of this newspaper, descriptive words are used to create the scene in your mind, however, the journalist, Brian Flynn, also cleverly incorporates the most important details of the story, without destroying the image of the incident: 'Terrified passengers on the jet that crashed in New York yesterday were seen screaming at its windows seconds before they died.' ...read more.

But because of the dominant nature of the story, the headline doesn't have to rely on prior knowledge. However, because there is a full size colour picture behind, the headline becomes ten times more effective. The image will spark memories of the September 11th terrorist attacks, and after reading "Oh my God, not again" we inevitably know what the story is about. From the three papers, I think that the most effective headline is the Daily Star's. This is because the two short words are eye-catching, simple and yet extremely powerful. The other headlines are effective, but not nearly as evocative. The headline and first paragraph might be what sells a newspaper, but the actual content of the story can be a lot more interesting. Does presenting the truth purely do this? We are very much influenced by newspapers, but how much of a story is fact and just how much is opinion? I will firstly describe The Sun's use of fact and opinion. The Sun uses a variety of adjectives to put a more shocking perspective on the story, but pure factual sentences are regularly used. The Sun uses the least amount of opinion out of the three newspapers, but still manages to put across the event in such a way that allows readers to see the scene of the incident in their mind. This is achieved by using quotes directly from witnesses. "I saw something drop off the plane and then it just spun to the ground. I thought, 'Oh my God, those poor people'. This quote is obviously an opinion, but because a witness actually said this, The Sun can present it as a fact. ...read more.

The editor of a newspaper gives the readers what they want, what they talk about, and what may interest them. I certainly believe that the events of November 12th fall into this category. As I discovered, despite the fact each of the newspapers cover the same story, the articles are completely different. There are an infinite amount of ways to tell a story - each journalist will put a different angle on the story, interview different people, use different photographs and use different amounts of fact and opinion etc. I thought the three different newspapers' target audiences were meant to be very similar, because they are all national daily tabloids, (including similar material and stories) however I would not have been able to deduce that by reading the stories I have been analysing. The Daily Mails' description of the event is more like a fictional story; where as the Daily Star's description of the event is short, terse and brief. Does a person want a to sit down and thoroughly read a detailed account of the event or is the reader in a rush to detect the main details during a quick flick of the paper one coffee break? Perhaps the Daily Mail was intended for people to read every detail on every page, and perhaps the Daily Star was intended for people to scan through, I've only analysed one particular story of the newspaper, I do not think I can automatically assume this. Concluding the analysis of three front pages of national daily tabloids newspapers, I do not think there are a vast amount of similarities to any newspaper story, obviously the main facts are going to compare to one another, but as this exercise has demonstrated, every aspect of an article differs to the next. ...read more.