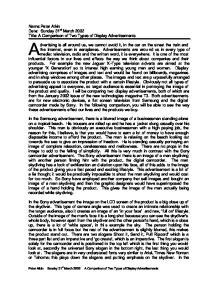 A Comparison of Two Types of Display Advertisements

Name: Peter Atkin Date: Sunday 31st March 2002 Title: A Comparison of Two Types of Display Advertisements A dvertising is all around us, we cannot avoid it, in the car on the street the train and the Internet, even in aeroplanes. Advertisements are around us in every type of media: television, radio and the written word, it is everywhere. It is one of the most influential factors in our lives and effects the way we think about companies and their products. For example the new Jaguar X-Type television adverts are aimed at the younger 'X Generation' so to interest high earning young men and women. Display advertising comprises of images and text and would be found on billboards, magazines and in shop windows among other places. The images and text are purposefully arranged to persuade us to associate the product with a certain lifestyle. Obviously not all types of advertising appeal to everyone, so target audience is essential in portraying the image of the product and quality. ...read more.

This advertisement is a bit of a lie though; it would be practically impossible to shoot the man skydiving and would cost far too much. So Sony have employed another company that sell images and bought an image of a man skydiving and then the graphic designers would have superimposed the image of a hand holding the product. This gives the image of the man actually being recorded while skydiving. In the Sony advertisement the image on the LCD screen of the product is a big close up of the skydiver. This type of camera angle was used to create an intimate relationship with the target audience, also it creates an image of an 'in your face' and raw, 'full on' lifestyle. Outside of the image of the man's face it is a long shot because you can see the skydiver's whole body, however apart from the skydiver and the other person's hand, which is a close up, there is a lot of 'white space', in this example the sky. ...read more.

'Mix business with pleasure' is a play on words and a two part contrast. Also in the Samsung Electronics advertisement there is the universal Samsung slogan: 'Samsung Digitall, everyone's invited' this is a two part contrast and an imperative. This advertisement is not as interestingly arranged and the universal Samsung Electronics slogan is not linked in with the product whereas the Sony advertisement has a series of circles showing what the product can do and in the final circle is the slogan. Because we in class only had black and white photocopies of the advertisements I cannot comment on the use of colour. In the Sony advertisement the whole feel of the image is one of a fast paced and action packed lifestyle, this however is in complete contrast with the Samsung television advertisement which is laid back and relaxed. The use of connecting the product to a certain type of lifestyle is used in almost all display advertisements and changes the passer by's perception of the product and company. Peter Atkin Sunday 31st March 2002 A Comparison of Two Types of Display Advertisements ...read more.