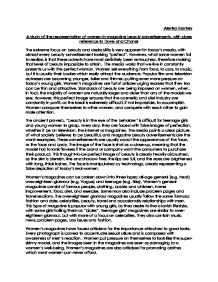 A study of the representation of women in magazine beauty advertisements, with close reference to Dove and Chanel.

Alenka Manley A study of the representation of women in magazine beauty advertisements, with close reference to Dove and Chanel The extreme focus on beauty and desirability is very apparent in today's media, with almost every beauty advertisement looking "perfect". However, what some women fail to realise, is that these adverts have most definitely been re-touched, therefore making that level of beauty impossible to attain. The media world that we live in constantly presents us with the perfect woman. Women sell everything from food, to cars, to music, but it is usually their bodies which really attract the audience. Popular film and television actresses are becoming younger, taller and thinner, putting even more pressure on today's young girls. Women's magazines are full of articles urging readers that they too can be thin and attractive. Standards of beauty are being imposed on women, when, in fact, the majority of women are naturally larger and older than any of the models we see. However, this perfect image ensures that the cosmetic and diet industry are constantly in profit, as the ideal is extremely difficult, if not impossible, to accomplish. Women compare themselves to other women, and compete with each other to gain male attention. The ancient proverb, "beauty is in the eye of the beholder" is difficult for teenage girls and young women to grasp. Every day, they are faced with false images of perfection, whether it be on television, the internet or magazines. The media paints a clear picture of what society believes to be beautiful, and magazine beauty advertisements are the worst examples. These advertisements are usually about the appearance of the face, or the face and body. The image of the face is shot as a close-up, meaning that the model has to look flawless if the brand or company want the consumers to purchase their product. This thought-to-be perfect image of beauty is clearly heavily airbrushed, as the skin is blemish, line and shadow free, the lips are full, and the eyes are brightened with long, thick lashes. ...read more.

Their philosophy was not to retouch or airbrush any of their advertisements; it was merely to portray the realness of today's average woman. The advertisements that Dove create are relatively clean and simple, merely advertising the product with a clear, straightforward approach. The generic conventions of basic but effective designs reappears with the adverts Dove produce. They all feature normal women from the general public, with "real" body shapes and sizes. In a print media advert for "Dove Firming" body cream, the colour used is predominantly white. The background is white, and the underwear worn by the model is also white. This colour connotes innocence, purity and cleanliness. This colour is also used on the bottle of the products, which allows connections with the advertisement and the product. As with Chanel, these colours are generic conventions of Dove and its advertising techniques. As the model is dark skinned, this means that her and her shape is in sharp focus due to the contrast against the background. She is located slightly left of the page, but she is in a full body shot, showcasing her natural curves. The smile is that of "super-smiler" which is friendly and inviting, whilst her eye contact is connecting with the audience. Her head is resting on her shoulder, tilted towards the camera, which connotes a sense of innocence and genuineness. Her legs are bent and her arm is resting softly on her leg, which also connotes a sense of relaxed and carefree enjoyment. The model is of average weight and height, not the stereotypical "Size 0" supermodel. This strategic choice of model relates to the majority of the target audience; women who are most likely to be of natural weight and size. Her hair is pulled back into a ponytail which shows off the true beauty of her face, and she is wearing just underwear to boast her natural feminine figure. ...read more.

She is looking directly down the camera lens, inviting the audience. Her lips are chocolate box, which adds more seductiveness to the advert. Her cheekbones are highly defined, and her skin is totally without blemish. Her hair is classically dark and voluminous, placed over her left eye, which suggests roughness, as not everything is in place. It provides a sense of rebellion, which could connote the style of the perfume. Keira Knightley is here posing as the late Coco Chanel, using intertextuality to familiarise with audiences. The style of this fashionista is apparent in the advert, and the classic look that the model portrays is that of Coco Chanel. The target audience for this advert is those who are interested in fashion, fans of Keira Knightley or of the brand, elite or glamorous women and those who can afford luxurious products. The flawlessness of the model also appeals to young girls, as they look up to her as a role model. Young girls wish to look like the "perfect" models featured in the advertisement. The model is stereotypically thin and attractive, and has near-to-perfect skin, hair and figure. It may be clear to some that this picture has been re-touched, even going as far as enhancing the shape of her breast. Her arm appears to have been lengthened and slimmed, same with her torso. With her face, the cheekbones look to have been defined, her eyes whitened and her hair perfected with every strand in place. As Chanel is known as a "premier" clothing and cosmetics company, the adverts therefore need to live up to the high quality of the brand. The recurring form of the adverts formulates Chanel's style of producing top quality products, shown with the high-status style of their advertising. The models featured in the advertisements all follow the same pattern; thin, beautiful and flawless. However, some audiences do not realise that these adverts are literally not real, as so much image manipulating takes place that they are miles away from the original photographed image. .. ?? ?? ?? ?? ...read more.