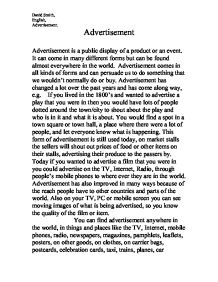 Advertisement is a public display of a product or an event. It can come in many different forms but can be found almost everywhere in the world. Advertisement comes in all kinds of forms

Advertisement Advertisement is a public display of a product or an event. It can come in many different forms but can be found almost everywhere in the world. Advertisement comes in all kinds of forms and can persuade us to do something that we wouldn't normally do or buy. Advertisement has changed a lot over the past years and has come along way, e.g. If you lived in the 1800's and wanted to advertise a play that you were in then you would have lots of people dotted around the town/city to shout about the play and who is in it and what it is about. You would find a spot in a town square or town hall, a place where there were a lot of people, and let everyone know what is happening. This form of advertisement is still used today, on market stalls the sellers will shout out prices of food or other items on their stalls, advertising their produce to the passers by. Today if you wanted to advertise a film that you were in you could advertise on the TV, Internet, Radio, through people's mobile phones to where ever they are in the world. Advertisement has also improved in many ways because of the reach people have to other countries and parts of the world. ...read more.

Advert 1, The Punto The purpose of this advertisement is to make a profit for the company selling the car (Fiat). The audience that this advertisement is directed at is the people who want a lot of style for not a lot of money. You would find this advertisement in places like magazines, sides of buses, billboards, newspapers, internet, radio, TV, posters, leaflets or pamphlets. In this advert it shows the car being the main attraction (as they are trying to sell it!) and shows a bride to be, leaving the most important day of her life, and the most important man in her life, to look at/buy this Fiat Punto. She is also leaving a Roles Royce out side and wanting to swap cars. The advertisements in this picture are mainly telling you some factual data, like on the license plate there is the number 5,000,000 and below this in the writing it tells you that they have 5,000,000 customers of the Punto. The price shows us that they lie a bit as it says 'From six thousand five hundred and ninety five pounds.' Notice how they say 'From' this means that it starts at this price but doesn't mean that you will get it at this price. Another thing about this advert is the technical writing at the top- Fuel consumption figures = MPG and Co2 emissions [g/km]: Urban 38.7(7.3), Extra Urban 58.9(4.8), Combined 49.6(5.7), = Co2 136. ...read more.

This car is a family car and is directed to people with children, this is shown through various methods. Firstly the many catch phrases used from other films which are catchy and you remember them like Honey I shrunk the kids, only they say honey I shut up the kids, using the special offer they have thrown in for free but puts the price of the car up which is integrated DVD players on the back seats for the kids. They use these phrases all through the advert using phrases from Finding Nemo, Snow White, Home Alone and Rugrats go wild. They say that this DVD player is free but the car is very expensive for a car in its class, 14,508 is the price. At the bottom of the page it has information on 3 years unlimited mileage and the technical information that is on all adverts that no-one understands. The advert is made to show that this car is dominant and is showing this by the car being the only main picture and the size of the poster is very large showing that you can fit a lot in it. I don't think that this that this car will sell well because it is not a very well known name and people would like to buy a car from a company that is well known. Mainly because of other peoples judgment, but also because of safety reasons. ?? ?? ?? ?? David Smith, English, Advertisement. ...read more.