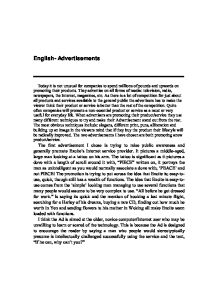 English- Advertisements Today it is not unusual for companies to spend millions of pounds and upwards on promoting their products. They advertise on all forms of media: television, radio, newspapers, the Internet, magazines, etc. As there is a lot of competition for just about all products and services available to the general public the advertisers has to make the viewer think their product or service is better than the rest of the competition. Quite often companies will promote a non-essential product or service as a must or very useful for everyday life. When advertisers are promoting their product/service they use many different techniques to try and make their Advertisement stand out from the rest. The most obvious techniques include: slogans, different print, puns, alliteration and building up an image in the viewers mind that if they buy the product their lifestyle will be radically improved. The two advertisements I have chosen are both promoting anew product/service. The first advertisement I chose is trying to raise public awareness and generally promote Excite's Internet service provider. ...read more.

The Ad mainly of a blue tone, this is significant as it is a dull colour and the man appears dull, the writing however is a complete contrast, the main bulk is yellow which makes the reader think that Excite will be exciting as it has made this man's life more exciting. The text is spilt up into three blocks, this is easy to read and it adds to the image of Excite being easy to use. The first block and the punch line are both in big yellow type (apart from "excite.co.uk" in white, obviously so it stands out.) This text is supposed to catch your eye and then you may read the rest of the text if you are interested. The first block of text has to get the reader interested so they will read on. To try and hook the reader they use humour, alliteration and try to impress the reader. The humorous side is that a large, dull, biker (apparent because text says he, "searched for the Harley of his dreams") ...read more.

just like all the other gloves are. They also try to impress the reader maker them think the gloves are very high-tech and a lot of research has gone into designing them, using words like, "the ulnar nerve" which most people probably haven't heard of. The glove is probably aimed at the more mature rider (25+), as the younger rider is probably not interested in the health aspect of the sport and all the technical details. The text is small and classy and all in one lump, this is flattering the reader as it is not broken up unlike many other Ad's. The Mountain Bike glove stands out from the rest as it is much more bright and colourful, this makes the gloves more desirable than the rest. The advert is on the back page of a magazine so it is very unlikely that everyone won't see the Ad, it is also on thick glossy paper, which adds to the impression of class. The Specialized trademark is a squiggle because it is easy to remember and visualize when you are in a shop wishing to purchase the product. Overall the Ad is trying to say the gloves are essential, classy, protective, better than the competition and stylish ...read more.