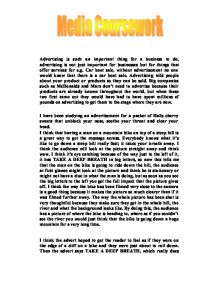 Advertising is such an important thing for a business to do, advertising is not just important for businesses but for things that offer services for e.g. Car boot sale, without advertisement no one would know that there is a car boot sale.

Advertising is such an important thing for a business to do, advertising is not just important for businesses but for things that offer services for e.g. Car boot sale, without advertisement no one would know that there is a car boot sale. Advertising tells people about your product or products so they can be sold. Big companies such as McDonalds and Mars don't need to advertise because their products are already known throughout the world, but when these two first came out they would have had to have spent millions of pounds on advertising to get them to the stage where they are now. I have been studying an advertisement for a packet of Halls cherry sweets that unblock your nose, soothe your throat and clear your head. ...read more.

is doing, but as soon as you see the big letters to the left you get the full impact that the picture gives off. I think the way the bike has been filmed very close to the camera is a good thing because it makes the picture so much clearer than if it was filmed further away. The way the whole picture has been shot is very thoughtful because they make sure they get in the whole hill, the river and what the background looks like. By doing this, the audience has a picture of where the bike is heading to, where as if you couldn't see the river you would just think that the bike is going down a huge mountain for a very long time. ...read more.

The fonts in this advertisement are really interesting because straight away it doesn't tell you about Halls it tells you to take a deep breath, gets you hooked and then tells you about Halls and what they do. The fonts aren't really big either, they're only big when the audience doesn't know about the advertisement and aren't hooked, this is TAKE MY BREATH AWAY, then after this when the audience is hooked the fonts are small enough for you to find out for yourself. The pictures and words relate to each other by having the right font and right colour next to the picture, because people read from top to bottom, left to right, the picture looks exactly like the words relate to it. The picture is designed like this to get the message across. ...read more.