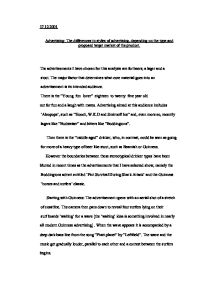 Advertising: The differences in styles of advertising, depending on the type and proposed target market of the product.

17.12.2001 Advertising: The differences in styles of advertising, depending on the type and proposed target market of the product. The advertisements I have chosen for this analysis are for beers; a lager and a stout. The major factor that determines what core material goes into an advertisement is its intended audience. There is the "Young fun lover" eighteen to twenty five year old out for fun and a laugh with mates. Advertising aimed at this audience includes 'Alcopops', such as "Hooch, W.K.D and Smirnoff Ice" and, even more so, recently lagers like "Budweiser" and bitters like "Boddingtons". Then there is the "middle aged" drinker, who, in contrast, could be seen as going for more of a heavy type of beer like stout, such as Beamish or Guinness. However the boundaries between these stereotypical drinker types have been blurred in recent times as the advertisements that I have selected show, namely the Boddingtons advert entitled 'Pint Survival During Shark Attack' and the Guinness 'horses and surfers' classic. Starting with Guinness: The advertisement opens with an aerial shot of a stretch of coastline. The camera then pans down to reveal four surfers lying on their surf boards 'waiting' for a wave [the 'waiting' idea is something involved in nearly all modern Guinness advertising] . ...read more.

It aids in the power of the central metaphor whereby the drink itself remains pure, however maintains its mysterious edge. It also contributes on a more simple level, increasing the emotional connections to the audience, as it is in a minor key which is well known to be good at raising the hairs on the back of your neck. The advert makers have used computer graphics to create the horses in the wave. However, they have kept a subtlety about the horses thus continuing the mystical aura The people in this advert are all male. They are all continental in appearance and are loosely clad, wearing only bathing shorts and showing off their manly upper bodies. They are similar in appearance and build which adds a united feel to their group, almost as if they conform to a uniformed way of life. They appear brotherly in their actions, suggesting an emotional bonding between the group . They are a team, surfing, enjoying life. Do these men know, and have, something the average person does not? This is again backed up by a look given by the winner; a stare deep into the camera lens. ...read more.

This in turn, opens up appeal to more intellectual people who warm to the character in a fun sense. There is no sound track to this particular 'episode' as it has already been imprinted in earlier advertisements, but there is a voice over and this is the source of the sarcasm. It says "pint survival during shark attack. Hold Boddingtons away from snapping jaws" There is also an element of satire in that the text of the voice over resembles that of a safety pamphlet. E.g. "Hold Boddingtons away from snapping jaws!" The characters and their situations are also absurd; why would a cow be underwater? All this suggestive subtext lends itself to the 'joker' appeal, thus calling out to the intended audience. There is, of course, a small element of traditional advertising included within the piece, designed to inform and publicise the product. The name and easily recognisable logo appear on the screen at the advertisement's conclusion leaving an impression on the viewer's mind. This is, by definition, the essence of advertising, making something public and well recognised in order to promote its appeal. Nowadays, advertising is taken one step further in attempts to sell, by manipulating opinions, as opposed to letting a product sell itself. ...read more.