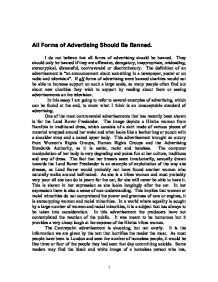 All Forms of Advertising Should Be Banned.

All Forms of Advertising Should Be Banned. I do not believe that all forms of advertising should be banned. They should only be banned if they are offensive, derogatory, inappropriate, misleading, stereotypical, distasteful, controversial or discriminatory. The definition of an advertisement is "an announcement about something in a newspaper, poster or on radio and television". If all forms of advertising were banned charities would not be able to increase support on such a large scale, as many people often find out about new charities they wish to support by reading about them or seeing advertisements on the television. In this essay I am going to refer to several examples of advertising, which can be found at the end, to show what I think is an unacceptable standard of advertising. One of the most controversial advertisements that has recently been shown is for the Land Rover Freelander. The image depicts a Himba woman from Namibia in traditional dress, which consists of a skirt made of various pieces of material wrapped around her waist and what looks like a leather bag or pouch with a shoulder strap and a naked upper body. This advertisement brought an outcry from Women's Rights Groups, Human Rights Groups and the Advertising Standards Authority, as it is sexist, racist and tasteless. The computer manipulation of her body is very degrading and pokes fun at her culture, traditions and way of dress. ...read more.

The image of a 15 month old baby preparing to inject itself with heroin in a dark, filthy alleyway may make some readers feel repulsed by the image. The advertisement may be so odious that many readers may move on to the next page with out even noticing the charity it is advertising. This would be the complete opposite to what Bernardo's want as they need to attract attention, not turn it away, to raise money and help more children. There again the advertisement may draw the eye of the reader, as it is so revolting. When the reader sees what charity is being advertised by such a disgusting image the reader may turn against Bernardo's for voluntarily subjecting a child to such conditions if they did not know what precautions were taken when the photo was taken. It is stereotyping people with a disturbed childhood into drugs addicts by there early twenties. Although the advert says "Battered as a child it was always possible that John would turn to drugs." The human eye picks up on positive words such as 'always' and 'would'. If the reader were just scanning the advertisement their brain would think it is saying that because John was battered as a child he would turn into a drug addict. This is not true as many people overcome their past troubles and start again. The message in this advertisement could be presented in a much less shocking way. ...read more.

It is because of this that not many advertisements are made that would be labeled unacceptable, as it would be a waste of money to produce unusable material. If there was no advertising allowed on television there would be no income for ITV or channel four as they rely on advertising for their income. Advertisements on the radio would have to contain swearing, misleading or untrue information for them to be banned. On some radio station there is an advertisement that gives a telephone number you can ring if you find an advertisement inappropriate or discriminatory. All forms of advertising would never be banned as too many people rely on advertising for a job and many large companies would become bankrupt such as ITV and Channel Four, which I have already mentioned. I think all forms of advertising should not be banned as too many people would loose their jobs and only a small percentage of advertisements are considered unacceptable by the laws of the Advertising Code. If advertisements need to be monitored closer then a cross section of the society with all backgrounds, racial groups, classes, ages and views should be asked if they think the advertisement is acceptable or unacceptable. This would be very easy to organize in the modern day with so many households owning a computer and access to the Internet. They could be e-mailed a copy before general release and reply with their views and thoughts on the advertisements. ?? ?? ?? ?? 1 ...read more.