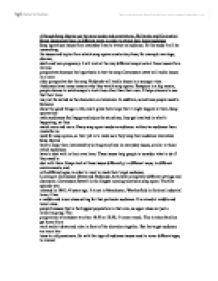 Although Soap Operas use the same codes and conventions, Hollyoaks and Coronation Street manipulate them in different ways in order to attract their target audience

Although Soap Operas use the same codes and conventions, Hollyoaks and Coronation Street manipulate them in different ways in order to attract their target audience Soap operas use issues from everyday lives to attract an audience. In this study I will be researching the issues and topics from which soap operas create storylines, for example marriage, divorce, death and teen pregnancy. I will look at the way different soaps look at these issues from various perspectives because the hypothesis is that the soap Coronation street will tackle issues in a more older perspective but the soap Hollyoaks will tackle issues in a younger view. Audiences have many reasons why they watch soap operas. Escapism is a big reason; people choose to watch soaps to look lives other than their own. It helps viewers to see that their lives may not be as bad as the characters on television. In addition, sometimes people need to fantasise about the good things in life, and it gives them hope that it might happen to them. Soap operas also make audiences feel happy and enjoy the storylines, they get involved in what's happening, so they watch more and more. Every soap opera needs an audience: without an audience there would be no need for soap operas, so their job is to make sure they keep their audience interested. ...read more.

The soap is at 18.30, this is a time when older people are still at work or travelling home so the soap needs to tackle issues very differently because it looks at young teens - young adults rather than the older generation. However some people do not consider the show to be a serious drama when compared with the bigger soaps such as Eastenders and Coronation Street, partly due to its reputation for hiring numerous attractive, blonde, ratings-grabbing actresses. The settings of both soaps are very different too. Coronation Street is set in a traditional street with a corner shop, a pub, a very local neighbourly place where everyone knows everyone and their business this is where all the conflict comes in, and the audience become familiar with the characters. Whereas Hollyoaks, Chester is a bigger setting of a village not just a street. It includes a pub, a shop, a nightclub, a school and most important a university. The characters are mostly young and beautiful, so there is many two faced people, where most of the conflict happens. Looking at different characters from both soaps, you see how different some characters are and some similarities there are. Two characters a have been looking at are coronation street's Sally Webster and Hollyoaks new character Kathy Barnes. ...read more.

She has been married but that ended and she has also been in the wrong crowds, fleeing coronation street but returning in 2004. She then got into a relationship with newcomer Jamie Baldwin but later started sleeping with his father Danny behind his back. After him finding out and leaving Leanne she is now in a relationship with Danny Baldwin and trying to still be devious and ruin people's lives. Comparing Leanne to Hollyoaks character Mandy Hutchinson, we can see that she is quite the opposite. Mandy is wife to Tony and mother to Antonia. Mandy owns the nightclub The Loft and with her degree in business studies from HCC, she and Tony own a lot of businesses in Hollyoaks. In the past, Mandy has been with many different guys and with the loss of her father, brother, mother and step father, she became quite alone but with the help of her husband Tony she is now back on her feet with her own new family. Even though both characters are the same age they lead very different live. Audiences see both soaps very differently in the different actors for both soaps. Some people do not consider Hollyoaks to be a serious drama when compared with the bigger soaps such as Eastenders and Coronation Street, partly due to its reputation for hiring numerous attractive, blonde, ratings-grabbing actresses. ?? ?? ?? ?? ...read more.