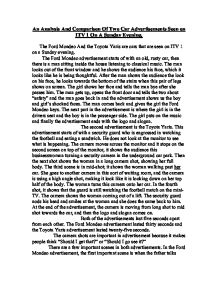 An Analysis And Comparison Of Two Car Advertisements Seen on ITV 1 On A Sunday Evening.

An Analysis And Comparison Of Two Car Advertisements Seen on ITV 1 On A Sunday Evening. The Ford Mondeo And the Toyota Yaris are cars that are seen on ITV 1 on a Sunday evening. The Ford Mondeo advertisement starts of with an old, rusty car, then there is a man sitting inside the house listening to classical music. The man looks out of the front window and he shows the audience his face, which it looks like he is being thoughtful. After the man shows the audience the look on his face, he looks towards the bottom of the stairs when this pair of legs shows on screen. The girl shows her face and tells the man bye after she passes him. The man gets up, opens the front door and tells the two about "safety" and the man goes back in and the advertisement shows us the boy and girl's shocked faces. ...read more.

The woman turns this camera onto her car. In the fourth shot, it shows that the guard is still watching the football match on the mini-TV. The camera shows the woman coming out of a lift. The security guard nods his head and smiles at the woman and she does the same back to him. At the end of the advertisement, the camera is moving from long shot to mid shot towards the car, and then the logo and slogan comes on. Both of the advertisements last five seconds apart from each other. The Ford Mondeo advertisement lasted thirty seconds and the Toyota Yaris advertisement lasted twenty-five seconds. The camera shots are important in advertisement because it makes people think "Should I get that?" or "Should I go see it?" There are a few important scenes in both advertisements. In the Ford Mondeo advertisement, the first important scene is when the father talks about "Precautions", the boy and girl look at each other with a shocked face. ...read more.