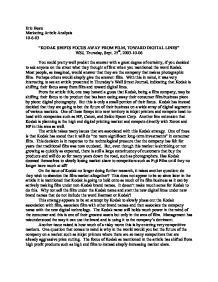 An analysis of a marketing article

Eric Beste Marketing Article Analysis 10-6-03 "KODAK SHIFTS FOCUS AWAY FROM FILM, TOWARD DIGITAL LINES" WSJ, Thursday, Sept. 25th, 2003-10-06 You could pretty well predict the answer with a great degree of certainty, if you decided to ask anyone on the street what they thought of first when you mentioned the word Kodak. Most people, as imagined, would answer that they are the company that makes photographic film. Perhaps others would simply give the answer: film. With this in mind, it was very interesting to see an article presented in Thursday's Wall Street Journal, indicating that Kodak is shifting their focus away from film and toward digital lines. From the article title, one may hazard a guess that Kodak, being a film company, may be shifting their focus to the product that has been eating away their consumer film business piece by piece: digital photography. But this is only a small portion of their focus. Kodak has instead decided that they are going to bet the future of their business on a wide array of digital segments of various markets. One of these forays into new territory is inkjet printers and compete head-to-head with companies such as HP, Canon, and Seiko Epson Corp. ...read more.

Another issue raised is how much of a risky move this is by entering very competitive markets. One question that comes to mind is why in the world would you bet the future of the company on a market such as inkjet printers where there are so many competitors that are already aggressive price cutting. The focus of Kodak as mentioned in the article has shifted from high profit products such as high end film to instead simply increasing market share. A second line extension that management has chosen to put the Kodak name on is high end printing where there are already juggernauts such as Xerox and HP to contend with. No mention is made in the article on how they are going to be competitive with the contenders are in control of these markets. Instead the only strategy mentioned is they are going to take the competition head-on. This will result in a failed product if there is no innovation. I imagine there would be many questions that would go through the mind of a customer on hearing Kodak was making inkjet and high-end printers. Why would customers want to try Kodak's new brand when they already have a proven brand in Xerox, HP, Canon, or Epson in these different segments? ...read more.

Overall the Kodak strategy is a workable one but needs certain modifications. First of all, it appears that Kodak has given up on its core film business to provide continuing growth into the future which is fine but is not fully prepared to let go of the business immediately. It is putting one foot into a couple new camps and then keeping the other in the old film business. The "old" core business is being used to finance the new. Another revealing point is Kodak's focus. When I think of Kodak, my first response is film. The responses that don't come to mind are digital imaging, digital cameras, photo ready inkjet printers or high end printers. It's ok to go into all these lines of business, but they should use a different brand name for each like Honda did for Acura in order to increase chances of brand success, not only from a national standpoint but internationally as well. Also, they should take advantage of the powerful brand image of Kodak in the mind of the consumer and keep this on the film. Putting non-Kodak brand names on their film will most likely result in further loss of market share to other companies that specialize in consumer film. Finally, moving into a couple already saturated markets with no attempt to innovate and instead taking head-on the segment leaders is a sure strategy to product suicide. ...read more.