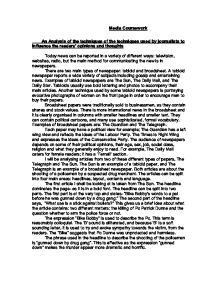 Media Coursework An Analysis of the techniques of the techniques used by journalists to influence the readers' opinions and thoughts Today news can be reported in a variety of different ways: television, websites, radio, but the main method for communicating the new is in newspapers. There are two main types of newspaper: tabloid and broadsheet. A tabloid newspaper reports a wide variety of subjects including gossip and entertaining news. Examples of tabloid newspapers are The Sun, The Daily Mail, and The Daily Star. Tabloids usually use bold lettering and photos to accompany their main articles. Another technique used by some tabloid newspapers is portraying evocative photographs of women on the front page in order to encourage men to buy their papers. Broadsheet papers were traditionally sold to businessmen, as they contain shares and stock values. There is more international news in the broadsheet and it is clearly organised in columns with smaller headlines and smaller text. They can contain political cartoons, and many use sophisticated, formal vocabulary. Examples of broadsheet papers are: The Guardian and The Telegraph. Each paper may have a political view for example; The Guardian has a left wing view and reflects the ideas of the Labour Party. ...read more.

The writer (Kim Sengupta) does not put forward his own point of view in this article. Quotes from MPs and Police members are used, and they put forward their opinions. As they have opposing views to each other. Sengupta has tried to include arguments from both sides. This is an effective technique, because it lets the readers make up their own mind about the subject. Although there are only two main stories, the writer has organised them into three sections. Section one consists of paragraphs one to four and deals with the victim's own view on the debate. Pc Dunne believed that the police force should be armed "What use is a stick against bullets?" Section two includes paragraphs five to nine and discusses Pc Dunne's life, and then leads on to his murder. In the first part, it includes background information on Pc Dunne: "quit teaching to become a policeman three years ago." It then deals with his "tragic" murder and includes colloquial, informal language. Section three contains paragraphs ten to twelve. This includes the discussion on whether the police force should be armed or not. ...read more.

Also, the words differ from the expressions used in article one; they are not used in order to evoke sympathy from the reader or to create a dramatic atmosphere. The phrases used to describe the manner in which Pc Dunne died are blunt and straight to the point: "the killing" and "shot". This is in contrast to article one, where the words were exaggerated and embellished. The writers use a combination of sentence structures in this article. For example there are many complex sentences e.g. in paragraph one, and some simple sentences e.g. in paragraph nine. The writers also use a variety of complex punctuation. For example, colons, semi colons, commas, exclamation marks and full stops. Sophisticated vocabulary is used in this article. These include: "indiscriminately", "lucrative", "and derivative". The language is more formal, and less exaggerated than in article one. Also it is factual, and helps to provide a descriptive account of the murder and the other key issues. I think that article two is more effective than article one. I believe this as it reports the facts in a detailed, well-researched manner. Unlike in article one, it doesn't include words to directly affect the reader; we are just informed about what is important. In comparison to article one, it contains more sophisticated, but not exaggerated, vocabulary. ...read more.