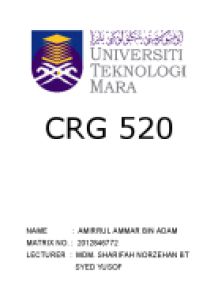 An Ethical Review of the film &quot;Gattaca&quot;

﻿CRG 520 NAME : AMIRRUL AMMAR BIN ADAM MATRIX NO. : 2012846772 LECTURER : MDM. SHARIFAH NORZEHAN BT SYED YUSOF ________________ ________________ SYNOPSIS In the imagination of ?the not-too-distant? future of our world, the movie Gattaca by Andrew Niccol revolves around the technological advancement of genetics that allows society to eliminate almost all possibilities of defects in the newborns. However, Vincent Freeman, the protagonist, is a product of the obsolete method of conceiving and was born with a number of dysfunctions. He is determined to be an astronaut but with his ?imperfections?, he has zero chance. Strong-willed and unrelenting, he assumes the identity of Jerome Morrow, crippled by an accident and is willing to help Vincent. Armed with DNA samples from Jerome, Vincent is in the quick run towards achieving his goal. In a sudden turn of events, the Mission Director is murdered and Vincent sloppily leaves an eyelash at the scene. He has to figure out a way to avoid stirring any suspicions, pass all DNA tests and hope that he can still follow his dreams. STAKEHOLDERS One of the stakeholders is Vincent Freeman. He has to take extreme measures in order to pursue his dream. ...read more.

The hero, Vincent was also able to go on the mission and at last fulfil his dream. The action of Director Josef can be considered as an act of egoism but ultimately it bought enough time to ensure that the mission would proceed as it should be. By sacrificing his own liberty, he was able to give more benefits than burdens to others. In other words, his act of supposedly in self interest was actually an act of altruism, though it was still a crime. In fact, retributive justice was served at the end of the story as the police finally found out that Director Josef is the true culprit behind the murder of the Mission Director. DEONTOLOGY Deontology differs from the philosophy of consequentialism. Deontology focuses more on the rights or duties that motivate the decision or action rather than its consequences. The hero, Vincent Freeman assumes the identity of Jerome Morrow in order to infiltrate Gattaca and become an employee there as a navigator. He defied the law that clearly forbade a man of his stance to be on the list for the mission to Titan. From a deontologist point of view, Vincent is considered unethical because his rights or duties did not allow him to do such things just for the sake of his dreams. ...read more.

Vincent?s persona was a splendid example of what reality is like for us. A most valuable lesson indeed: Do not judge a book by its cover. Next, in our everyday endeavour, we should always use our aql before we do anything and think of all the consequences of the action that we were about to do. The benefits and burdens should be identified, whether it is for us or for other people. I also learned that every action will not go unjustified, whether it is distributive, compensatory or retributive justice from God. By the God?s will, the vices will be punished and the virtues will be handsomely awarded, if not now, in the afterlife. I also learned that parents should not be selective of how each of the children are treated. They all must be treated as equally as the others. Unhappy childhood could result to many complications as they grow up so it is up to the parents to make sure that they children are in the right track. Lastly, we should not practise the syaitaniyyah behaviour such as selfishness and lying because it can affect our lives in a bad way. We should also try to avoid doing things like altering our genetic codes just to be more superior because we would be changing how God intend us to be and that is sinful. ...read more.