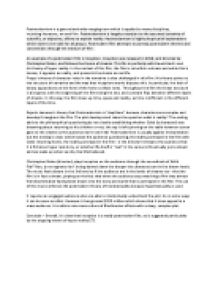 An example of a postmodern film is Inception. Inception was released in 2010, and directed by Christopher Nolan

﻿Postmodernism is a general and wide-ranging term which is applied to many disciplines, including literature, art and film. Postmodernism is largely a reaction to the assumed certainty of scientific, or objective, efforts to explain reality. Postmodernism is highly skeptical of explanations which claim to be valid for all groups. Postmodern film attempts to portray postmodern themes and conventions through the medium of film. An example of a postmodern film is Inception. Inception was released in 2010, and directed by Christopher Nolan, and follows the theme of dreams. This fits in perfectly with Baudrillard's and his theory of hyper reality. In the context of this film, the film is set within a dream and while this is known, it appears as reality, and presents the dream as real life. ...read more.

In this way, the film mixes up time, space and reality, as time is different in the different layers of the time. Rejects Jameson's theory that Postmodernism is "depthless" because characters are complex and develop throughout the film. The plot develops and raises the question what is reality? The ending adds to the philosophical questioning by not clearly establishing whether Cobb (a character) was dreaming about returning to his children or not, the top is left spinning on the table however screen goes to the credits so the audience don't see it fall. Postmodernism is usually against interpretation but the ending is clear, which leaves the audience questioning; the reality portrayed in the film with Cobb returning home, the reality portrayed in the film - is the director ...read more.

is in fact a dream, playing on the fact that when the audience stop watching a film they almost feel disorientated having been drawn into the story and world that is portrayed in the film. The use of this music enforces the postmodern theory of transtextuality because hypertextuality is used It requires an engaged audience who are able to intellectually understand the plot. So in some ways it can be seen as elitist. However it has grossed $825 million which shows that it does appeal to a mass audience. It is able to mix mass culture of Blockbuster effects with a deep, complex plot. Conclude ? Overall, It?s clear that inception is a really postmodern film, as is suggested particularly by the ongoing theme of hyper reality ETC ...read more.