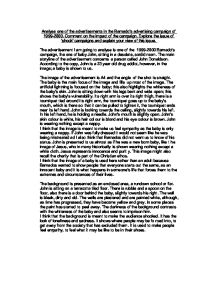 Analyse one of the advertisements in the Barnado's advertising campaign of 1999-2000. Comment on the impact of the campaign. Explore the issue of 'shock' campaigns and explain your view of this issue.

Analyse one of the advertisements in the Barnado's advertising campaign of 1999-2000. Comment on the impact of the campaign. Explore the issue of 'shock' campaigns and explain your view of this issue. The advertisement I am going to analyse is one of the 1999-2000 Barnado's campaign, the one of baby John, sitting in a desolate, sordid room. The main storyline of the advertisement concerns a person called John Donaldson. According to the copy, John is a 23 year old drug addict, however, in the image; a baby is shown to us. The image of the advertisement is A4 and the angle of the shot is straight. The baby is the main focus of the image and fills up most of the image. The artificial lightning is focused on the baby; this also highlights the whiteness of the baby's skin. John is sitting down with his legs bent and wide open; this shows the baby's vulnerability. Its right arm is over its right thigh, there is a tourniquet tied around its right arm, the tourniquet goes up to the baby's mouth, which is there so that it can be pulled to tighten it, the tourniquet ends near its left hand. ...read more.

The copy uses rhetorical devices to try make people feel that they should help. On the third paragraph, it starts off by giving a negative view by saying that they 'no longer run orphanages', however, they compensate this piece of criticism by mentioning that they still 'continue' helping 'thousands' of children which also shows the extent of their work and shows that their mission statement has not changed, they still help children. I think that the fourth and last paragraph may be one of the most important parts of the copy as it gives people the chance to make a difference, to make a 'donation'. This paragraph works well with the other paragraphs; it persuades people to help. I think it was placed last because it needs the effect of the other paragraphs, to shock people into helping. The concept behind the phrase 'Giving children back their future' was that barnados wanted to save children from their 'possible futures'. According to their advertising campaign, children were shown doing the things their future selves would from the appalling childhood. The copy describes the disturbed conditions of their childhood, and it explains to use how their lives ended up in the way that they have. So Barnados work to save them from this tragic future, 'Giving children back their future'. ...read more.

would attract the younger market as most of them like the 'dangerous life'. Overall I think that this campaign is very sicessful as it attracts attention, and even though it is offensive to some people I believe that it still appeals to their target market and therefore it is very sucessful. Also I think that if charaties can use shocking campaigns, why can't they? On the other hand, there are shocking campaigns such as the anti-speeding campaign which was shown on tv all day for children to see, even though the target group of this campaign were not children but adults who do not like to say within the speed limit. It show a young girl, possibly 8 years old, she is laying on the ground next to a tree with her wrist and ankle dislocated and blood trickling down her face. And suddenly the scene is being rewinded, the blood returns, her wrist and ankles fix themselves. She is then being dragged along the floor by a invisible force onto the road and then she breaths in deeply as if that was her breath of life. Words then appear telling us that if you drive at 40 miles per hour, there is 80% chance that she will die, however if you drive at 30 miles per hour, she will have 80% change of living. These words are big and stick into our heads. ...read more.