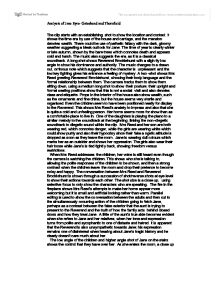 Analyse the use of camera shots, mise en scene, sound and editing in the 'Jane Eyre' TV drama, with particular reference to the contrast between Gateshead and Thornfield.

The clip starts with an establishing shot to show the location and context. It shows the time era by use of the house and carriage, and the mansion denotes wealth. There could be use of pathetic fallacy with the dark, gloomy weather suggesting a bleak outlook for Jane. The time of year is clearly winter or late autumn, shown by the bare trees which connotes death and appears cold and harsh. The music also suggests the era, as it is a classical soundtrack. A long shot shows Reverend Brocklehurst with a slightly low angle to show his dominance and authority. The music changes to a drawn out, ominous note which suggests that the character is unpleasant and the low key lighting gives his entrance a feeling of mystery. A two-shot shows Mrs Reed greeting Reverend Brocklehurst, showing their body language and the formal relationship between them. The camera tracks them to show them sitting down, using a medium long shot to show their posture; their upright and formal seating positions show that this is not a social visit and also denotes class and etiquette. Props in the interior of the house also show wealth, such as the ornaments and fine china, but the house seems very sterile and organised. ...read more.

The clip in Thornfield begins with an establishing long shot which establishes the time of year and gives a view of an autumnal pastoral scene which, when combined with the background sound of birdsong, gives the setting an air of peace and welcome. The music in the non-diegetic soundtrack is more upbeat than that in Gateshead. There is a cut-in from this shot to the horses and carriage which shows that it is important and not merely part of the scenery. There is a close-up of the side of the carriage when Jane gets out, showing her expression and gaining empathy with the viewer as she appears apprehensive. A slightly low angle is used to show that Jane has lifted in status since leaving Gateshead, although the shot is still fairly eye level for a sense of equality with the audience. Her face is also positioned in a hot-spot using the rule of thirds, showing her importance. From the close-up, there is a POV establishing shot of Thornfield Hall, which tells the audience that this is where she is going and also allows contrast with Gateshead. While Gateshead was a large mansion, Thornfield is a huge castle which shows wealth. ...read more.

Mrs Fairfax also seems to have more of a rapport with the servants, as opposed to Mrs Reed who largely ignored their presence. A series of mid-shot shot/reverse shots during the conversation between Jane and Mrs Fairfax shows their expressions and body language. Their non-verbal codes here show that they are likely to become close in time, and that Jane has been accepted. A pan tilt to show the servant returning with Adele also shows a candle in the passage, signifying that Jane's future is now looking more bright and optimistic, and could also signify education since she is meeting the child that she will be teaching. A medium long-shot of the group shows Jane meeting Adele, who curtsies to her out of respect and shows Jane's elevated status. She is the tallest figure in the frame, making her seem important, and this also shows a contrast between the events in Gateshead where Jane was brought to meet Reverend Brocklehurst who had come to take her away to school. In the Thornfield scene, it is the little girl Adele who has been brought to meet Jane, and this shows how clearly she has moved on from events in her past and that now she is in charge. ?? ?? ?? ?? Analysis of Jane Eyre- Gateshead and Thornfield ...read more.