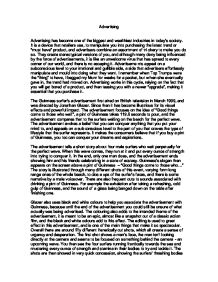 Advertising Advertising has become one of the biggest and wealthiest industries in today's society. It is a device that retailers use, to manipulate you into purchasing the latest trend or "must have" product, and advertisers combine an assortment of trickery to make you do so. They create stereotypical versions of you, and although many deny being influenced by the force of advertisements, it is like an unwelcome virus that has spread to every corner of our world, and there is no escaping it. Advertisements appeal on a subconscious level to your irrational and gullible side, a side that advertisers effortlessly manipulate and mould into doing what they want. I remember when Top Trumps were the "thing" to have, I begged my Mum for weeks for a packet, but when she eventually gave in, the trend had moved on. Advertising works in this cycle, relying on the fact that you will get bored of a product, and then teasing you with a newer "upgrade", making it essential that you purchase it. The Guinness surfer's advertisement first aired on British television in March 1999, and was directed by Jonathan Glazer. Since then it has become illustrious for its visual effects and powerful impact. The advertisement focuses on the idea of "Good things come to those who wait", a pint of Guinness takes 119.5 seconds to pour, and the advertisement compares that to the surfers waiting on the beach for the perfect wave. The advertisement evokes a belief that you can conquer anything that you put your mind to, and appeals on a subconscious level to the part of you that craves the type of lifestyle that the surfer represents. ...read more.

An image of a pint of Guinness comes in at the end, and is held on screen for 13 seconds. This contrasts against the rapidity of the prior scenes, after all the chaos in the water, you are left almost out of breath yourself, but the stillness of the image and the length it is just held on the screen, really makes it stick in your head. Guinness' slogan appears above the pint, this slogan is so well known by now that the use of an ellipsis is used for added effect. Overall, I would conclude that this advertisement is very successful, it appeals to its target market on many different levels, and makes what is a relatively ordinary object, seem like so much more through an excellent use of epical special effects. The advertisement is very clever, and appeals to an irrational, ambitious side of you that some people didn't even know existed, and subconsciously makes you associate a pint of Guinness with bigger ideas and aspirations. After seeing the advertisement, you are much more inclined to order a pint of Guinness above any other beer, because you are under the illusion that doing so will transform you into that surfer; a much more free willed, adventurous and ambitious version of yourself. The second advertisement I have chosen is the Levis Odyssey Advertisement, directed by Stephen Butler. This advertisement first aired in 2002 and promotes a range of Levis called Engineered Jeans. The advertisement is very dramatic and compelling, and although there is no dialogue and little story to it, it has stunning visual ...read more.

Ironically, he opens the door from the room he is in before starting, an action which he makes no effort to repeat throughout the rest of the advertisement. The music is like a lament, quite pensive and mournful. It is very effective and almost moving - bricks smash, clouds of dust explode, the runners have expressions of the utmost frustration and rage strewn across their faces, yet the music continues peacefully and slowly. It starts to get a lot more upbeat and dramatic nearer the end of the advertisement, yet it is still has a tragic feel to it. Overall, I think this advertisement is very effective, and it will persuade a lot of potential consumers to purchase the product. It cleverly makes them think that by simply buying a pair of jeans, they will be buying into a whole new way of living. The freedom that comes with the jeans will be mirrored in the new freedom that they will acquire. Breaking through walls and buildings could be symbolic to breaking through any personal restrictions or barriers that are holding them back. Of course in reality, a mere pair of jeans cannot grant you "freedom", maybe physically, but that is what the whole concept of advertising is, to appeal to that same irrational side of you that believed a pint of Guinness will help you conquer your dreams. At the time it seems that the product is a necessity, something that truly will change your life, and the disappointment you get when you realize this isn't true, is the ammunition that starts the whole process off again. ...read more.