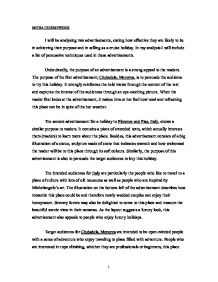 Analysing two advertisements, stating how effective they are likely to be in achieving their purpose and in selling as a cruise holiday.

MEDIA COURSEWORK I will be analysing two advertisements, stating how effective they are likely to be in achieving their purpose and in selling as a cruise holiday. In my analysis I will include a list of persuasive techniques used in these advertisements. Undoubtedly, the purpose of an advertisement is a strong appeal to the readers. The purpose of the first advertisement; Ciudadela, Menorca, is to persuade the audience to try this holiday. It strongly reinforces the held views through the content of the text and captures the interest of the audiences through an eye-catching picture. When the reader first looks at the advertisement, it makes him or her feel how cool and refreshing this place can be in spite of the hot weather. The second advertisement for a holiday to Florence and Pisa, Italy, shows a similar purpose to readers. It contains a piece of extended texts, which actually interests them (readers) to learn more about the place. Besides, this advertisement consists of a big illustration of a statue, sculpture made of stone that indicates warmth and how welcomed the reader will be to this place through its soft colours. ...read more.

As both the holidays are on cruise, this really intends to attract people who are eager to spend their capital openly. People who like to collect souveniors from different places are also targeted. Both the advertisements contain an interesting form of language. The text contains many positive descriptive words that sound wonderful. For example for Menorca, in the highlights it tells us that it took 50 years to build this cathedral. This tells us how magnificent that cathedral will be to look at. The advertisements also contain alliterations. For example for Italy, "snap up something in silver", or "lap up some luscious local wines". Alliteration makes the advertisement more catchy and memorable. Commands such as, "then go do it now" also exists in the extended texts that make the holiday sound exotic. Repetition is also a common feature used in the adverts. For example, "Art, Art and more art" in the Italy advert. In fact this strengthens the advertisements. The adverts use the informal address as "you". It makes it more personal and emphasises each individual. ...read more.

For Menorca, an illustration of the atmosphere of the place is described. The weather is suggested by the blue sky. Blue sky represents calm weather. The reader's main interest and look may be the beaches. Readers may feel that the beaches are attractive and horse-riding is fun. Regardless, of the hot weather, as the girl is sweating, the clear water makes the girl look cool and refreshed. For Italy, the place is represented by an enormous and famous master piece of Michelangelo. This suggests the place is filled with mind blowing architecture and sculptures. The masterpiece is brown in colour and the colour is muted soft, the place appears to be really peaceful along with dark night light shining. This illustration attracts people interested in ancient history. Florence has cathedrals showed by a small illustration on the bottom middle of the advertisement. Cathedrals are also a good form of attraction of the place. How effective are these advertisements? This may vary upon an individual's perspective. These advertisements were quite appealing to me. I imagined myself being there. If I were one of the readers, I would love to be there. It is quite effective for me. ?? ?? ?? ?? 1 ...read more.