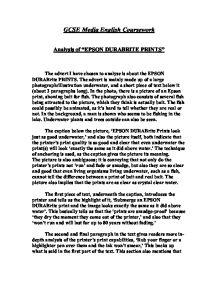 GCSE Media English Coursework Analysis of "EPSON DURABRITE PRINTS" The advert I have chosen to analyse is about the EPSON DURABrite PRINTS. The advert is mainly made up of a large photograph/illustration underwater, and a short piece of text below it (about 2 paragraphs long). In the photo, there is a picture of an Epson print, showing bait for fish. The photograph also consists of several fish being attracted to the picture, which they think is actually bait. The fish could possibly be animated, as it's hard to tell whether they are real or not. In the background, a man is shown who seems to be fishing in the lake. Underwater plants and trees outside can also be seen. The caption below the picture, 'EPSON DURABrite Prints look just as good underwater,' and also the picture itself, both indicate that the printer's print quality is so good and clear that even underwater the print(s) ...read more.

This basically tells us that the 'prints are smudge-proof' because 'they dry the moment they come out of the printer,' and also that they 'won't run and will last for up to 80 years without fading.' The second and final paragraph in the text gives readers more in-depth analysis of the printer's print capabilities, 'Rub your finger or a highlighter pen over them and the ink won't smear,' This backs up what is said in the first part of the text. This section also mentions that 'Each colour ink comes in its own cartridge, which keeps waste down, and so you can print on both sides of the page,' and that 'you'll always end up with a pin-sharp image.' The last three sentences advertise more products from 'EPSON' and also the company itself, 'If you prefer borderless photos try EPSON DURABrite Photo Paper', ...read more.

Those certain readers then have no choice but to see for themselves, which ultimately leads them into testing out/purchasing the product. The colour of the text is kept the same throughout the advertisement, but the sizes differ (for example the caption underneath the main picture is larger than the rest of the text below it). The main concept of the font is also kept constant all through the advert, although the caption is in bold (emphasis) and the text below isn't. The four pictures at the bottom of the advert show three different EPSON DURABrite printer models and a set of different colour ink cartridges. Next to them, in the bottom left of the advertisement is the "DURABrite INK" logo which also illustrates the different colours available. Finally, in the bottom right hand side of the advert, is a large "EPSON" logo, which obviously is advertising the company itself (Note that there are no slogans). ...read more.