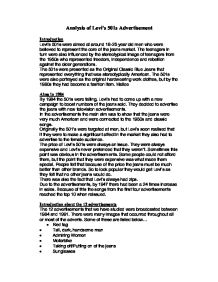 Analysis of Levi's 501s Advertisement Introduction Levi's 501s were aimed at around 16-25 year old men who were believed to represent the core of the jeans market. The teenagers in turn were also influenced by the stereotypical image of teenagers from the 1950s who represented freedom, independence and rebellion against the older generations. The 501s were presented as the Original Classic Blue Jeans that represented everything that was stereotypically American. The 501s were also portrayed as the original hardwearing work clothes, but by the 1980s they had become a fashion item. Malice Aims in 1984 By 1984 the 501s were failing, Levi's had to come up with a new campaign to boost numbers of the jeans sold. They decided to advertise the jeans with new television advertisements. In the advertisements the main aim was to show that the jeans were very much American and were connected to the 1950s and classic songs. Originally the 501's were targeted at men, but Levi's soon realised that if they were to make a significant affect in the market they also had to advertise to the female audience. ...read more.

The sunglasses and comb were typically thought to have belonged to 'macho' men who were in turn thought to be the most popular and whom most of the women wanted. The advertisement that I have chosen to evaluate is known as the fridge advert, but I will refer to the others later. Brief summary of selected advertisement My selected advertisement is known as the fridge advertisement. The slogan on the advertisement was 'The Original Jeans'. The band that made the soundtrack for the advertisement was called Muddy Waters and the song's title is Mannish Boy (thus again referring to the typical macho image). The song in turn is about sex and picking up women. Detailed Analysis There are much fewer people in this advertisement than any of the others, but altogether there are 5 people. There are 3 men, 2 are old and the other is considered to be the typical macho 'hero'. There is a young admiring woman and an old women. ...read more.

The hero leaves the caf� and mounts his motorbike followed by the admiring young women. He rides off down a long empty road on his Harley Davidson. The open road symbolizes that he is free to do what he wants because of the jeans and if you want to be free like the rebellious 1950s teenagers, then you have to buy these jeans too. This bike was thought to be the 'classic' or 'cool' bike that everyone should own. Again the male audience would want to be like him because it would make them 'look cool and attractive.' Conclusion The fridge advertisement does have its own style of convincing people; this basic layout stays the same. Most of them show a man or a women putting on the jeans, but all of them have a handsome man included. As a whole I feel that the advertisements were very effective as they used the fact that people wanted to show off to their friends and that Levi's was the best way to do it. By Malavarayan Koshalavarman ...read more.