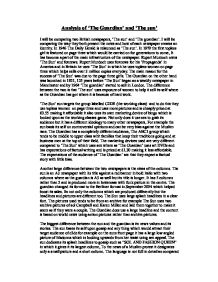 Analysis of ‘The Guardian’ and ‘The sun’

I will be comparing two British newspapers, ‘The sun’ and ‘The guardian’. I will be comparing the way they both present the news and how of each newspaper creates an identity. In 1946 The Daily Herald is relaunced as ‘The sun’. In 1970 the first topless girl is featured on page three which would be carried on for generations to come, It has become a part of the main infrastructure of the newspaper. Rupert Murdoch owns ‘The Sun’ and foxnews. Rupert Murdoch uses foxnews for his ‘Propaganda’ in America and in Britain he uses ‘The Sun’ in which he uses topless women on page three which helps sells over 3 million copies everyday. The main reason for the success of ‘The Sun’ was due to the page three girls. The Guardian on the other hand was launched in 1821, 125 years before ‘The Sun’ began as a weekly newspaper in Manchester and by 1964 ‘The guardian’ started to sell in London. The difference between the two is that ‘The sun’ uses exposure of women to help it sell its self where as the Guardian has got where it is because of hard work.

‘The Sun’ sun targets the group labelled C2DE (the working class)  and to do this they use topless women  on page three and uses more pictures and is cheaply priced at £0.55 making it affordable it also uses its own marketing device of bingo which is looked upon as the working classes game. Not only does it use sex to grab its audience but it has a different ideology to many other newspapers, For example the sun basis its self on controversial opinions and can be very bias against the Muslim race. The Guardian has a completely different audience, The ABC1 group which tends to be middle to upper class whit families that keep their traditions going and at business men at the top of their field. The marketing devices used are very different compared to ‘The Sun’ which uses sex where as ‘The Guardian’ uses art DVDs and has expectations of factual writing and is priced at £1.30 making it less affordable. The expectations of the audience of ‘The Guardian’ are that they expect a factual story with little bias.

Another large difference between the two newspapers is the sizes of the columns. The sun is an A3 newspaper with its title against a red banner in bold italic with two columns where as the guardian is A3 as well but its title is longer. It has 5 columns rather than 2 and is produced more in lowercase with funk picture in the centre. The guardian changed its format to the Berliner format in September 2004 which helped boost its sales. Its not only the columns which are produced differently but the headlines and pictures are different too. The Sun uses large splash headlines in a clear font. The pictures used tends to be from an archive for example The Sun uses two archive pictures of sol Campbell and Karen Millen and laid them together to make it seem as if they were a couple. The Guardian does use a large headline and the content is based on world news using action pictures rather than archive pictures.

The biggest difference between the sun and the guardian is its news values and its stories. The sun bases its self upon gossip and any thing which would attract their target audience of c2de for example on the suns front page it has a large low angled picture of Madonna which is looking upwards from her waist using sex appeal. The sun dedicates its splash headlines to gossip such as “SOL AND FASHION QUEEN” in which it gives it its largest column, To the news of a Muslim protest it designates only a small picture and a short column. The language is not full in detail as compared to a broadsheet. The Sun’s main stories are dedicated to celebrities. The Guardian on the other hand uses its main headlines for a reflection on international events such as the cartoon controversy with Muslims. The language tends to give more information and dedicates more space to world events and only a small space for area for gossip. The guardian uses full words unlike the sun in which they shorten them for example they use “Sol” instead of sol Campbell assuming that you know who he is.