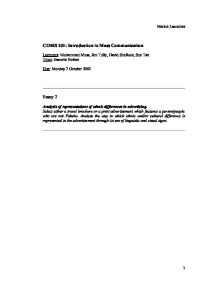 Analysis of representations of ethnic differences in advertising.

Marine Laouchez COMS 101: Introduction to Mass Communication Lecturers: Mohammed Musa, Jim Tully, David Shellock, Sue Tait Tutor: Jeanette Forbes Due: Monday 7 October 2002 Essay 2 Analysis of representations of ethnic differences in advertising. Select either a travel brochure or a print advertisement which features a person/people who are not Pakeha. Analyse the way in which ethnic and/or cultural difference is represented in the advertisement through its use of linguistic and visual signs. Advertising companies are often criticised for not turning to people who are not of White European descent for their campaigns. Of course, persons like Naomi Campbell or 'Uncle Ben' are now well known by the audience, but they are the exception that confirms the rule. One company decided to alleviate this shortage: Benetton. Conversely to the hidden conventions, they, with the help of the Eldorado agency and their photograph Oliviero Toscani, chose ethnicity as a core theme of their advertising campaigns and then claimed their originality in the way they were advertising and denouncing racism at the same time. Analysing Benetton's ads is therefore particularly interesting, as trying to find out what is different from the other ads where different ethnic groups are represented, but also to know if their goal is achieved. ...read more.

The logo is similarly present in the edge of the picture. No matter how different the shots can be, they all tend to have similar connotations. Indeed there are recurrent themes in Benetton's ads. They often have recourse to children and babies to represent their brand. Here they are present in three of the four ads selected. Children are a common allegory for innocence and their reaction to racism is different from adults1. They do not classify the people they meet in racist categories. The children in the first ad seem to be able to have a party regardless to the descent of the hosts. The baby does not probably care about the colour of the breast that is feeding him. The role of the Asian baby in the fourth ad is less obvious. Certainly, he is not able to realise that, genetically speaking, he could never be the offspring of such a couple. Moreover, he is in the middle of the picture and thus seems to be its most important element. It also looks like his left fist is raised as a sign of protest. Adding to this the defying look of his parents, and this shot conveys the impression that this family is asserting their (impossible) ...read more.

Another one was apparently representing a soldier, with a machinegun slung across his shoulder and holding a thighbone. These ads could be accused to represent African people as primitive and backward, whereas they just wanted to show that "to be tolerant of diversity is not easy, no matter its form". The danger of polysemy is very high when it comes to the representation of ethnicity in advertisement. Analysing Benetton's ads is really interesting in the way that the firm claimed its ability to advertise differently and its activism in the fight against racism. Benetton's ads feature diverse ethnic groups more than any other company, as shown in the sample selected. Playing with the contrast between the skin colours and the feeling of solidarity between all races, Benetton and its now famous photograph Oliviero Toscani gained a foothold for the idea of cosmopolitism. Today Benetton has become a reference in the world of advertising and beyond. Jonathan Bignell wrote "the ad is constructed to make this shaping of the same mythic meaning appear automatic and unsurprising, whereas in fact it only exists by virtue of the ad's structure". Regarding Benetton, they used this to make tolerance and melting pot appear natural. They did it so well that now the expression 'a la Benetton' is used to describe a crowd/world where race mix is a bottom line. ...read more.