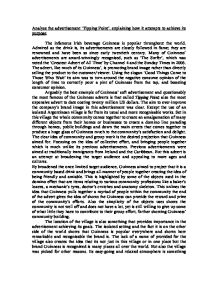 Analyse the advertisement 'Tipping Point', explaining how it attempts to achieve its purpose The infamous Irish beverage Guinness is popular throughout the world. Admired as the drink is, its advertisements are closely followed in fame; they are renowned and have been so since early twentieth century. Many of Guinness' advertisements are award-winningly recognised, such as 'The Surfer', which was voted the 'Greatest Advert of All Time' by Channel 4 and the Sunday Times in 2006. The advert, like much of its Guinness', is promoting brand image rather than directly selling the product to the customer/viewer. Using the slogan 'Good Things Come to Those Who Wait' its aim was to turn around the negative consume opinion of the length of time to correctly pour a pint of Guinness from the tap, and boosting consumer opinion. Arguably the best example of Guinness' soft advertisement and questionably the most famous of the Guinness adverts is that called Tipping Point; also the most expensive advert to date costing twenty million US dollars. The aim to ever-improve the company's brand image in this advertisement was clear. Except the use of an isolated Argentinean village is far from its usual and more recognisable works. Set in this village the whole community comes together to create an amalgamation of many different objects from their homes or businesses to create a domino line parading through homes, public buildings and down the main streets that comes together to produce a huge glass of Guinness much to the community's satisfaction and delight. ...read more.

Also the camera shot can be seen as calm and almost Godly but the way it is looking down from above. This shot provides us with our first impression, which shows us what the village is like despite its excitement and noises further on in the advertisement. The advert progresses to show members of the community hurriedly preparing the domino line, helping each other in their work and the close-ups of the effort on peoples faces; showing the amount of exertion that they are going to. We get to see people close up and almost meet the people of the community. Which brings us closer to the idea of being involved. We are immersed in the action and immediately feel included and warm to the advert. Peaceful music is also displayed in the background quietly as not to distract you from focusing on what is being shown in the images and creating that tranquil feel again. As the next scene begins the music is peaceful still, but as the first domino is knocked down the pace of it starts to be livelier and increase. As this happens the camera shot is also zoomed out so we see the whole complexity of the domino line in the scene and the effort gone into it. The advertisement progresses and we are shown mid-shot views of various parts of the village, as we follow the domino line and its destruction. ...read more.

and then wait for about a minute before pouring the rest in order to attain optimum taste, which is where the slogan 'Good Things Come to Those Who Wait' comes from. Just as the tension is almost unbearable the glass of Guinness continues and finishes much to the delight and over-powering excitement of the local villagers and also to the viewer. The whole community is joyous at this and brings them all united around the glass of Guinness, fulfilling the aimed depiction that Guinness wanted. As the advert draws to a close the infamous slogan is shown. Giving the implication that through all the tension of the domino lines and the build up to it. The end result is incredible and well worth the wait. Referring again to its way of serving. Implying that if you just wait the taste of Guinness is yet another clever play on the way Guinness should be poured; as previous will be better of that than other beer if you do not choose to wait. In conclusion, Guinness' Tipping Point advert uses slow and then fast and exciting music and a myriad of props and unthinkable construction to make the advert unforgettable and well worth the wait to watch. Its soft advertisement used throughout is extremely effective in its aim of broadening the target audience as people are given the clear idea of community and coming together related to the Guinness drink and brand and away from the traditional Irish and Caribbean market. ...read more.