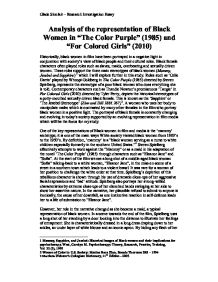 Analysis of the representation of Black Women in "The Color Purple" (1985) and "For Colored Girls" (2010) Historically, black women in film have been portrayed in a negative light in conjunction with society's view of black people and their cultural roles. Black female characters often played roles such as slaves, maids, overbearing and sexually driven women. These roles support the three main stereotypes of black women (Mammy, Jezebel and Sapphire) 1 which I will explore further in this study. Roles such as 'Celie Harris' played by Whoopi Goldberg in The Color Purple (1985) directed by Steven Spielberg, represents the stereotype of a poor black woman who does everything she is told. Contemporary characters such as Thandie Newton's promiscuous 'Tangie' in For Colored Girls (2010) directed by Tyler Perry, depicts the historical stereotypes of a potty-mouthed sexually driven black female. This is known as the 'Sapphire' or 'The Jezebel Stereotype' (Zinn and Dill 1884:267)2. A woman who uses her body to manipulate males which is contrasted by many other females in the film who portray black women in a positive light. The portrayal of black female is constantly changing and evolving in today's society supported by an evolving representation in film media which will be the focus for my study. ...read more.

This misrepresentation is a leading cause of the pre-conceived notion that black women are hard to get along with. Typical characteristics of the 'Sapphire' stereotype are argumentative, overbearing and essentially undesirable. In "The Color Purple", Sofia is symbolised as strong and independent martyr to racism and sexism. In the film, Sofia is no longer a martyr; instead, she is reduced to the stereotype of the Sapphire figure, the "over-bearing emasculating matriarch". 7 This is shown during the scene where Sofia is approached by a well-dressed white woman in the street requesting to employ Sofia as her maid. "Sofia" is understandably offended and defends herself, although it is unusual for a black woman at that time to refuse to comply with social expectations. Spielberg represents fury through dramatic close-ups of 'Sofia's' facial expressions depicting her as livid and aggressive. Frames of an angry 'Sofia' juxtaposed against a wider shot of the mise-en-scene of the southern street full of passing strangers surrounding her creates "Sofia" as the centre of focus. It is atypical of a woman of her social status to create such a scene as "Sapphire" stereotypes had not been formed yet. ...read more.

It all has a root, and you got to find that root and pluck it." 10 We later discover that she and her mother were sexually abused by the same man, a factor which makes an audience change their judgments of Tangie and essentially change the way in which they judge black women. With the aid of political figures such as Michelle Obama and women such as Oprah Winfrey and Beyonce Knowles, the representations of a successful empowered black woman have come to the forefront of world culture. These representations need to be echoed in contemporary film-making to make the common stereotypes irrelevant. However, if the only "misrepresentation" of a black woman in the media today is independent and opinionated, surely the problem lies in the perception not the representation. Word Count: 1,919 (Not including Essay title and references) 1 Mammy, Sapphire, and Jezebel: Historical images of Black women and their implications for psychotherapy. West, Carolyn M. Psychotherapy: Theory, Research, Practice, Training, Vol 32 (3), 1995 2 Women of Color in U.S. Society: Maxine Baca Zinn, Bonnie Thornton Dill - 1994 3 Merriam-Webster's Collegiate Dictionary, 11th Edition - 2003 4 Color, Hair, and Bone: Race in the Twenty-First Century By Linden Lewis, Glyne A. Griffith, Elizabeth Crespo Kebler, Bucknell University. ...read more.

A very good conclusion to a fine analysis, based upon good research into relevant critical debates on the representation of race and gender in contemporary culture. The writing is clear and simple, and the argument is logical and well structured, which is by far the best way to demonstrate one's understanding and intelligence :)

The footnote reference system is acceptable, but it should be noted that the Harvard system is preferred in most academic contexts.

It is hard to believe this is A level work, for it easily matches the quality of fine undergraduate writing.