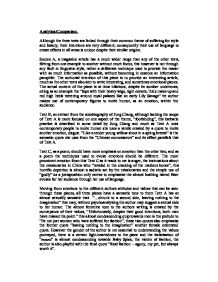 Analytical Comparison: Wild Swans, a Magazine Article and a Poem

Analytical Comparison. Although the three texts are linked through their common theme of suffering for style and beauty, their intentions are very different; consequently their use of language to create effects in all areas is unique despite their similar origins. Source A, a magazine article has a much wider range than any of the other texts, flitting from one example to another without much focus, this however is not through any fault in linguistic style, rather a deliberate technique used to provide the reader with as much information as possible, without becoming in essence an information pamphlet. The authorial intention of this piece is to provide an interesting article, much as the other texts also aim to write interesting, and sometimes emotional pieces. The actual content of the piece is at time hilarious, despite its somber undertones, citing as an example the "fops with their heavy wigs, tight corsets, thick make-up and red high heels teetering around royal palaces like an early Lily Savage" the author makes use of contemporary figures to incite humor, as an emotion, within the audience. Text B, an extract from the autobiography of Jung Chang, although lacking the scope of Text A is more focused on one aspect of the theme, "footbinding", this barbaric practice is described in some detail by Jung Chang and much ...read more.

The value system in Text B is much more somber and more offensively sarcastic to society, as would befit the focus on the subject matter, it is important to note that this piece is an autobiography and therefore is meant to show her feelings more than create an interesting piece simply to read. Chang uses a semantic field in the forth paragraph of disapproval, using such intended diction as; "insulting", "disdain", contempt" and "shame" however she uses context, "In those days" and adds her own comment about feet larger than ten and a half inches - "meaning normal feet". Chang uses this juxtaposition of such strong diction with subtle yet effective comments of her own to express her opinion of this practice and with the reaction it evoked within the society. Another far cry from the jovial approach that Text A adopts is Text C, in fact this Text seems to represent a number of opinions, Beer seems to express disgust, as Chang does, in her first stanza but then in her second proposes two view points as if from another person, it is almost as if Beer is torn between the elegance of having such small feet and the "approval" they would bring, and the fact that it is such a barbaric practice. ...read more.

Both Text B and C leave their ultimate judgments of the practice until the very end, Chang makes it quite clear that she would not have wanted her feet bound while Beer although ambiguous in her judgment does leave her "conclusion" until last. Both writers have used this technique to create a final impact on the audience, a final attempt to convey their viewpoints, which given the genre of the pieces is their intention. Finally the use in all three pieces of phonological features to influence their audience and achieve their authorial intentions. Alliteration is a common feature of all three texts, "flames fanned into a fury" provides Text A's author with an onomatopoeic clause artfully describing the terror of crinoline fires, using both alliteration and rhythm to add authenticity to the example. Text B's "Slender figure and sloping shoulders" makes use of assonance to give beauty to Chang's grandmother, this is then later used as a weapon against her targeted society, making the audience feel anger for this small grandmother who although "bursting with suppressed energy" was unable to form properly, a tragic tale is doubtless created through Chang's use of this technique. Text C, "handsome", "hard" and "heavy" form the example of alliteration, the authorial intent is to express her opinion and evoke emotions, this piece of alliteration with conflicting choices of lexis serve to illustrate her ambiguous feelings about the practice Chang so openly condemns. ...read more.