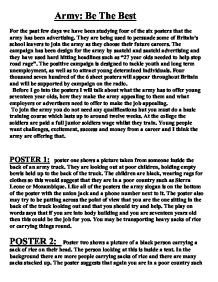 Army: Be The Best

Army: Be The Best For the past few days we have been studying four of the six posters that the army has been advertising. They are being used to persuade some of Britain's school leavers to join the army as they choose their future careers. The campaign has been design for the army by saatchi and saatchi advertising and they have used hard hitting headlines such as "27 year olds needed to help stop road rage". The positive campaign is designed to tackle youth and long term unemployment, as well as to attract young determined individuals. Four thousand seven hundred of the 6 sheet posters will appear throughout Britain and will be supported by campaign on the radio. Before I go into the posters I will talk about what the army has to offer young seventeen year olds, how they make the army appealing to them and what employers or advertisers need to offer to make the job appealing. To join the army you do not need any qualifications but you must do a basic training course which lasts up to around twelve weeks. ...read more.

You may be transporting heavy sacks of rice or carrying things round. POSTER 2: Poster two shows a picture of a black person carrying a sack of rice on their head. The person looking at this is inside a tent. In the background there are more people carrying sacks of rice and there are many sacks stacked up. The poster suggests that again you are in a poor country such as Mozambique or South Africa. It says "seventeen year olds needed to work in fast food chain". This may suggest that you will work transporting foods or getting rice and putting it in sacks. The play on words suggests that if you like working in fast food chains then you can join the army in that area. Many seventeen year olds will probably work in fast food restaurants now and may want a new challenge in life. POSTER 3: Poster three shows somebody under a camouflage piece of netting looking at a young girl who is probably Asian. Again she is wearing a ragged dress and looks distressed as she stands on her own on rough ground in an open space. ...read more.

This could be another possibility for them. After looking and studying the four posters you realise the different tasks and jobs the army has to offer. The missions maybe somewhat harrowing and challenging but young youths enjoy facing new tasks and the excitement that the army has to offer may persuade them to join. The four posters seemed to be in very poor countries, three of them possibly African and the other somewhere such as Bosnia or Poland. I feel they were attracting that age group as they are young which means they will probably have better fitness than someone older and also as they may be leaving school and looking for a career. I feel the posters were appealing and will have been a big success. I also notice that poster one began by saying "wanted" where as the others began with "17 year old" and then followed with needed or required. This occurred to me that the campaign for people into body building, to help with the transportation of food were more urgently required. I have enjoyed studying the posters and have learnt a lot from them. ...read more.