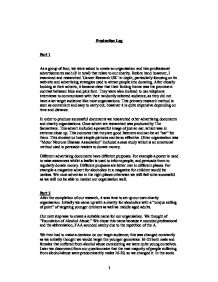 As a group of four, we were asked to create an organisation and two professional advertisements each (8 in total) that relate to our charity.

Production Log Part 1 As a group of four, we were asked to create an organisation and two professional advertisements each (8 in total) that relate to our charity. Before hand however, I examined and researched 'Cancer Research UK' in depth, particularly focusing on its web site and advertising strategies used to attract people into donating. After closely looking at their adverts, it became clear that their linking theme was the prominent contrast between blue and pink font. They were also inclined to use telephone interviews to communicate with their randomly selected audience, as they did not have a set target audience like most organisations. This primary research method is seen as convenient and easy to carry out, however it is quite expensive depending on time and distance. In order to produce successful documents we researched other advertising documents and charity organisations. Once advert we researched was produced by The Samaritans. This advert included a powerful image of just an ear, which was in extreme close up. This connotes that they are good listeners and can be an "ear" for them. This showed us how simple pictures can be so effective. Other organisation was "Motor Neurone Disease Association" included a case study which is an emotional method used to persuade readers to donate money. Different advertising documents have different purposes. For example a poster is used to raise awareness whilst a leaflet is used to inform people, and persuade them to regularly donate money. Different purposes are better met in different places. For example a magazine advert for alcoholics in a magazine for children would be useless. ...read more.

Below the logo, lies the name of our organisation-'Foundation of Alcohol Abuse' in a sea blue colour (same colour as alcohol images) which looks effective in relation to the orange strips. We used an Arial typed font for the charity name essentially because it is simple and gets straight to the point. Slogan First we had two slogans that related to our organisation, these were 'Sink That Drink' and also the abbreviation 'WKD' in an acrostic layout with the definition, 'We Kure Drinkers beside it. WKD is already a well-acknowledged alcoholic drink and therefore we ultimately decided to stick with just 'Sink That Drink'. This will be used in billboard advertisements with an image of a sink in the center and alcohol bottles pouring out its contents beside it. Colour We have used colour as little as possible, because we wanted to put emphasis on our linking colours that reflect our organisation (bright orange and blue). The logo itself will be positioned upon a white background, because the colour white connotes a sense of cleanliness and freedom and prior to this, our charity aims to break the alcohol addiction for people. Website Advertisement I created the homepage of the FAA website using 'Microsoft Front Page 2000'. It is mainly white, and the linking colours (both orange and blue) are evident in the navigational bar whereby the buttons are blue and the entire background is orange. I chose these colours because not only does it relate to the whole structure of the organisation (other advertisements) but also because it is amazingly distinctive and eye catching. I selected the 'new' tool in order to get the frames, which separated the main text from the links on the left hand side. ...read more.

Therefore we designed sufficient advertisements to make our campaign successful. Further research on existing adverts, however, might have helped our advertisements to create more influence. We also missed out indispensable elements of a conventional charity. On both Emmanuel's advertisements, he forgot to place a registered charity number and all charities have this placed at the bottom or along side their adverts in an inconspicuous print. From our research we have discovered that these come in various forms such as, Registered Charity No. 220782, Reg Charity No. 220782, Charity Reg. 220782 and Reg. No. 220783. I feel more group discussion would have helped produce more effective advertisements for my entire team as we could have had more time to share ideas on each others work and also give feedback to one another. I do feel as we have achieved our goal and that our charity campaign would have been successful. Although, further research on existing adverts may also help influence our advertisements in the long run. T-Shirt Good Points :) Bad Points :( * Looks professional, crisp and sharp image of logo * Contrasting colours of corporate logo look effective upon navy t-shirt * Fulfils its purpose of being a promotional product and can be bought to the people who donate. * No slogan or text * Expensive to make and if they are not sold we would lose money. FAA Homepage Good Points :) Bad Points :( * Presented well and appeals to the target audience. * Easy to navigate * Bright and attractive. * Informative * Faced trouble printing due to frame composition. * Could be improve with the use of flash images and text * Only one font style, more would make the site look more interesting and creative. 1 ...read more.