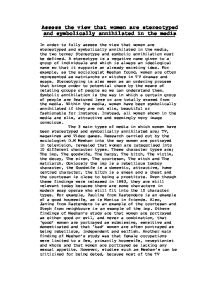 Assess the view that women are stereotyped and symbolically annihilated in the media.

However, when you look more closely at these magazines, you also find that almost all women are portrayed as being in fairly poor jobs and are portrayed as sex objects. The sociologist Ferguson said that women's magazines deal with material that is considered too trivial for general media and that these magazines tell women what to do and how to think about themselves, their men and their colleagues. In adverts within magazines, twice as many women appeared with children than men and women are rarely shown outdoors, instead in the house being depicted as a housewife. Since the 1980's, there has been increased awareness of eating disorders among young people, especially girls, and statistics indicate that the frequency of eating disorders is increasing. The main reason behind this are magazines aimed at teenage girls, which are too preoccupied with romance and reinforcing a dominant ideology of femininity. These magazines show pictures of slim, attractive, beautiful young women, and this causes the readers to strive to achieve unrealistic body sizes - girls as young as 11 and 12 are worried about their weight and body size. The sociologist Bruch said that illness is related to the enormous emphasis fashion places on being slim. ...read more.

After looking at these 3 media types, I can say the women are indeed stereotyped and symbolically annihilated within them. All of the 3 medias show in ideal image of women; slim, attractive and fashionable, but this raises a question - does the media create the people in society or do the people in society create what goes into the media? I think that it is the people who create what goes into the media, because things that get printed or shown are things that people in society want to see. In conclusion, you can also look at the feminist view of the media to try to see if women are stereotyped and symbolically annihilated. Liberal feminists believe that journalists have learnt to portray women in a particular way, usually classless and family based. Radical feminists see men as the enemy. Men hold dominant positions in the media and they consciously manipulate the content for their own benefit, and to the detriment of women Finally, socialist feminists blame the capitalist structure for the disadvantaged position of women in society and that the role of the media is to sustain the capitalist system and the role of women within it. ...read more.