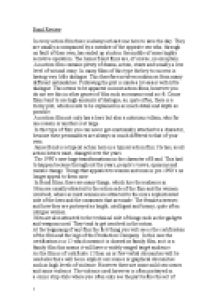 ﻿Bond Review In every action film there is always at least one hero to save the day. They are usually accompanied by a member of the opposite sex who, through no fault of their own, has ended up stuck in the middle of some highly secretive operation. The James Bond films are, of course, no exception. An action film contains plenty of drama, action, stunts and usually a low level of wit and irony. In many films of this type the key to success is having very little dialogue. This therefore involves audiences from many different nationalities. Following the plot is made a lot easier with little dialogue. This seems to be apparent in most action films, however you do not see this in other genres of film such as romance and sci-fi. Crime films tend to use high amounts of dialogue, as, quite often, there is a tricky plot, which needs to be explained in as much detail and depth as possible. An action film not only has a hero but also a notorious villain, who for one reason or another is at large. In this type of film you can never get emotionally attached to a character, because their personalities are always so much different to that of your own. James Bond is a typical action hero in a typical action film. He has, as all action heroes must, changed over the years. The 1990?s saw huge transformations in the character of Bond. This had to happen because through out the years, people?s views, opinions and morals change. Things that appealed to women and men in pre-1990?s no longer appeal to them now. In Bond films, there are many things, which lure the audience in. Men are usually attracted to the action side of the film and the women involved, where as most women are attracted to the more sophisticated side of the hero and the comments that are made. ...read more.

At this point you see that the actor is Bond and you know that what is about to happen I going to be dangerous. The bungee jump was the first jump ever to be attempted next to a wall of concrete. The stuntman, Wayne Michaels, had to do it from 640ft at an average speed of 100mph. In order to keep him away from the face of concrete in front of him he had to find a pocket of air to bounce him away from it. If he had timed anything wrong he would have had to do the whole jump again. The use of high and low angle shots in this scene adds to the roller coaster effect as it make s you feel you are there and involved in some way with the action. You feel the tension and know that something amazing is about to happen and then it does. The caption telling you where you are is a very important part of the film as it sets the scene and theme of the action. It specifies the place in which you are Arkangel Chemical Weapons Facility. It also tells you that you are in Communist Russia during the Glasnost period. You also now know that James Bond has something to do with it. The Piton and the laser gun, which are shot at the end of the jump, are the first two references to gadgets in the film. He pose straight after the jump is a typical Bond pose and it is the first time that the theme of iconography is brought out. Iconography is the idea of things associated with a character that for some reason is idolised. The pose with the gun and the tuxedo are only two of the things involved within the iconography. Iconic things are the bits and pieces that can make you recognise a character whit being told who it is for example James Bond ?The names Bond, James Bond.? Also Arnold Swarzeneger and ...read more.

She isn?t portrayed as someone who needs help with everything but she is shown as being strong, clever and also quite witty. This is another instance in which Bond films have been up dated. Women in the 1960?s were proud of how they were portrayed or if they weren?t then they weren?t bothered about how they were portrayed but today women take a more active part in society and expect to be shown how they really are. They tend to be brainier today and know how to deal with business and the development of new technology. The fast paced pre credit sequence has not only set up the audience to watch the rest of this film but it has geared them up to watch another Bond film. This is because it shows the audience what to expect in the line of stunts, gadgets and wacky and extremely unrealistic escapes. The whole of the pre- credit sequence is full of action and never actually slows down. It would be difficult to watch the rest of the film if you hadn?t seen the pre-credit sequence because even though the film is quite easy to follow most of the film action happens within the pre-credit sequence and the final sequence. Altogether Bond is portrayed as an unreal Super hero in what are quite possibly unreal situations. Or if the situations do happen then the odds against the hero/agent involved would be a whole lot higher. Bond hasn?t yet been killed because it is impossible to make the film last any longer if he is dead. Also Heroes hardly ever die in situations like this, there is Alec Trevelyan but he?s not really a hero and he?s not really dead. I think that most super heroes would probably end up dying because of old age just to show that the hero doesn?t die because he?s not up to his job. Bond is portrayed as your typical action hero in a typical action film. The series of films could go on and on not because the actor never dies, but because Bond never dies. ...read more.