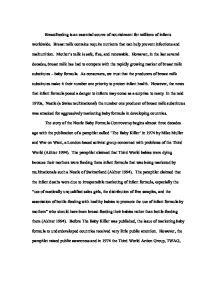 Breastfeeding is an essential source of nourishment for millions of infants worldwide.

Breastfeeding is an essential source of nourishment for millions of infants worldwide. Breast milk contains require nutrients that can help prevent infections and malnutrition. Mother's milk is safe, free, and renewable. However, in the last several decades, breast milk has had to compete with the rapidly growing market of breast milk substitutes - baby formula. As consumers, we trust that the producers of breast milk substitutes make it their number one priority to protect infant health. However, the news that infant formula posed a danger to infants may come as a surprise to many. In the mid 1970s, Nestle (a Swiss multinational) the number one producer of breast milk substitutes was attacked for aggressively marketing baby formula in developing countries. The story of the Nestle Baby Formula Controversy begins almost three decades ago with the publication of a pamphlet called 'The Baby Killer' in 1974 by Mike Muller and War on Want, a London-based activist group concerned with problems of the Third World (Akhter 1994). ...read more.

The Nestle baby formula controversy remains a reminder that even in today's economy a company can still suffer financial loss and find itself swallowed in a public relations nightmare due to the strength and unrelenting efforts of special interest groups and private voluntary organizations (Akhter 1994). These forces, which are comprised of grass roots groups and international organizations have become "active constituents of the new international sociopolitical environment, including international business activities," and show signs of becoming even more powerful as a watchdog for Third World countries in the years to come (Akhter 1994). Sources Akhter, Syed H. "Multinational Corporations and the Impact of Public Advocacy on Corporate Strategy: Nestle and the Infant Formula Controversy." Journal of International Business Studies. September 22 1994. Leeman, Sue. "Two Writers Pull Out of Festival Over Nestle Sponsorship." AP Worldstream. May 27 2002. Philipp, Barbara L.; O'Brien, Susan. "Physicians and Breastfeeding Promotion in the United States: A Call for Action." Pediatrics. March 01 2001. ...read more.