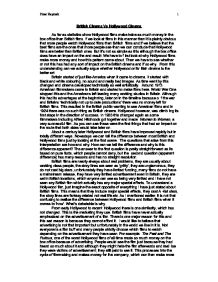 British Cinema Vs Hollywood Cinema As far as statistics show Hollywood films make twice as much money in the box office than British films. If we look at films in this manner than it is plainly obvious that more people watch Hollywood films than British films and if we believe that the best films are the ones that more people see than we can conclude that Hollywood films are better than British ones. But it's not as simple as this although the box office does have an impact on the end result. We have to first look at why Hollywood films make more money and how this pattern came about. Then we have to see whether or not this has had any sort of impact on the British cinema and if so why. From this understanding can we actually argue whether Hollywood or British cinema is the better art. Britain started of just like America when it came to cinema. It started with black and white colouring, no sound and really bad images. As time went by this changed and cinema developed technically as well artistically. Around 1913 American filmmakers came to Britain and started to make films here. World War One stopped this and the Americans left leaving many working studios in Britain. Although this had its advantages at the beginning, later on in the timeline because of the war and Britains 'technically not up to date productions' there was no money left for British films. ...read more.

I would like to believe that advertising is not that important but unfortunately in the world we live in it is. Not everyone is a film buff and many people strictly choose which films to watch depending on the advertisement they have seen. For example The Fast and The Furious, one of the worst Hollywood films of all time made so much money on the box office because of advertising. People would see the film just because they had heard so much about it and although they might hate the film afterwards and realise they were victims of advertisement; they still paid to see it. This processes into the cycle of filmmaking and makes money for the company, which can then make more films. A British film will not advertise much and rely on word of mouth, they will fail to make a lot of money in the box office and so they will not be able to accumulate enough money to make new films. Although the film might be great, if no one hears about it, no one will see it. America has funded many British films that have made money in the box office in Britain. This brings a new question, which has been debated for many years. What qualifies as a British film? According to the Film Act of 1985, a British film has to have 92.5% of the films running time created in Britain. ...read more.

Although they may not have enough funding for special effects, the narrative of the film is good enough for us to forget that. Hollywood films use lots of special effects but while doing that I think they forget that they actually need the narrative to make sense and (e.g. The Fast and The Furious). They may not have blond actresses and sexy actors, but at least they cast people that can act. What they need is funding and maybe make some films that can attract a global audience. As you can see to qualify as a British film, most of the money has to go back to British citizens, but to gain this the government has to fund films first. They let Hollywood fund films and when the film is a box office hit, Hollywood acquires all the money made from the film, which result in British companies making no money to make other films again. I also believe that a film should still be seen as a British film whether or not America funds it was still made by British talent. Lastly, I do believe that the British film industry has a rosy future because they make great films and sooner or later people will realise how great the films are. The only thing they need is for the government to trust them a bit more and fund them to gain this. This way all the British talent which are hiding or doing other jobs can have a chance and create great films for all to see. Pinar Kaymak 1 ...read more.

**** A lively debate on the differences between British and Hollywood film, and why the latter is deemed more successful than the former. The successes and failures of both national cinemas are analysed though more examples of actual films as case studies would further add to the colour of this essay.