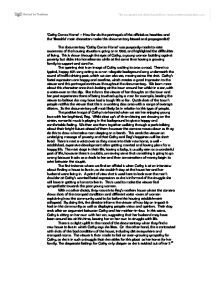 'Cathy Comes Home' - How far do the portrayals of the officials as heartless and the 'likeable' main characters make this documentary biased and propagandist?

'Cathy Comes Home' - How far do the portrayals of the officials as heartless and the 'likeable' main characters make this documentary biased and propagandist? The documentary 'Cathy Comes Home' was purposely made to raise awareness of the housing situations going on in 1966, and highlighted the difficulties of living. This is shown through the eyes of Cathy, a young woman battling against poverty but slides into homelessness while at the same time having a growing family to support and care for. The opening shot is an image of Cathy waiting to cross a road. There is a typical, happy 60's song acting as a non-diagetic background song underneath the sound of traffic driving past, which we can also see, moving across the shot. Cathy's facial expressions are happy and carefree, which creates a good impression to the viewer and this portrayal continues throughout the documentary. We learn more about this character once she is looking at the town around her whilst in a car, with a voice-over on the clip. She informs the viewer of her thoughts on the town and her past experiences there of being touched up by a man for example, leading the viewer to believe she may have had a tough life so far. ...read more.

This is used to make the viewer feel sympathetic towards the poor young woman. With no other choice, they move into Reg's mothers house where the camera shows shots of the cramped conditions and different voice-overs of women explaining how the community used to be before the housing establishment collapsed. By doing this, the director informs the viewer of how big an impact it had on the community as well as displaying peoples views and opinions. Their stay ends after an argument between Cathy and her mother-in-law. In this scene, Cathy is sitting on her own with her son, suggesting that her husband may have been around less at this time, leaving her on her own to struggle with life. There is a slight uplift in the mood of the documentary when they find a new house to live in which Cathy says she likes. On the other hand, this is contrasted with shots of the bad conditions of the house, including dirt everywhere and cramped rooms. The viewer is then made to feel an ever-growing sympathy for Cathy, as she is in such a struggle that she settles for this place as her home for her family. ...read more.

The dominant officials are dressed in smart suits, looking very stern while she is dressed in dirty old clothes, with her children crying in the background. This creates the idea that both types of people are from completely different worlds, and neither could relate to each other in any way. A distinctively sad expression is shown in a close up on Cathy as opposed to her usual cheery face when she realises she will be split from her husband. Also, this downwardly progresses as we see her looking miserable as she moves into the shelter and for the first time we see her cry when her husband sneaks in. This increases the viewer's desperation for the family and outraged at how the government handled the situations. Overall, the director of 'Cathy Come Home' has taken the value of women being nurturing and loving and put a whole weight of burden and responsibility on one of them and shown their struggle having to uphold these values. By contrasting greatly the poverty side of Britain with the government officials and telling the story through Cathy's eyes, he has made the viewers see and sympathise with her, while being angered at the lack of responsibility and amount of laziness the people in charge were. ...read more.