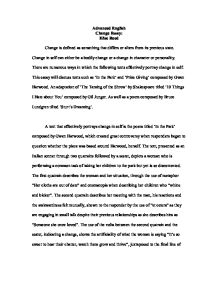 Change is defined as something that differs or alters from its previous state. Change in self can either be a bodily change or a change in character or personality.

Advanced English Change Essay: Elise Reed Change is defined as something that differs or alters from its previous state. Change in self can either be a bodily change or a change in character or personality. There are numerous ways in which the following texts effectively portray change in self. This essay will discuss texts such as 'In the Park' and 'Prize Giving' composed by Gwen Harwood. An adaptation of 'The Taming of the Shrew' by Shakespeare titled '10 Things I Hate about You' composed by Gil Junger. As well as a poem composed by Bruce Lundgren tilted 'Sturt's Dreaming'. A text that effectively portrays change in self is the poem titled 'In the Park' composed by Gwen Harwood, which created great controversy when responders began to question whether the piece was based around Harwood, herself. The text, presented as an Italian sonnet through two quatrains followed by a sestet, depicts a woman who is performing a common task of taking her children to the park but yet is so discontented. The first quatrain describes the woman and her situation, through the use of metaphor "Her cloths are out of date" and onomatopia when describing her children who "whine and bicker". The second quatrain describes her meeting with the man, his reactions and the awkwardness felt mutually, shown to the responder by the use of "et cetera" as they are engaging in small talk despite their previous relationships as she describes him as "Someone she once loved". ...read more.

The text 'Sturt's Dreaming', composed by Bruce Lundgren in 1995 as a combination of his passion for the diaries of European settlers as well as Aboriginal spirituality, effectively demonstrates change in self. As a result of the nature of the medium, poetry, the responder is able to affiliate their own personality and interpretations to the text as the composer depicts the expedition of Sturt, his visions and the harsh reality of his findings. The first stanza is set with a positive tone through the use of emotional language, such as the reference to Sturt's wife involving the responder on a personal level "(Charlotte called him "Charlie dear")". The explorers expect to succeed on their plight for the inland sea, as Sturt is depicted as an "efficient explorer- projecting a topographical dream" shown through geographical illusion. The second stanza goes on to use dramatic irony when depicting the harsh reality of their findings, through the use of "a legendary ocean" as the responder is aware that the ocean exists only in Sturt's mind. The composer uses several devices such as; onomatopoeia in "rattle" and assonance found in "wicked gibber" to depict the unfavourable conditions discovered by Sturt during their plight for the inland sea. The concept of change in self is primarily depicted through the variation of tone used between the two stanzas. The responder is shown the effects that reality can have on an individual's dreams and hopes. ...read more.

This is shown by the man's reliastion that all situations have positive outcomes, depicted to the responder by the man's response when his business is destroyed in an accidental fire, "There is something good and a lesson to be learned in everything that happens to you". The responder is clearly shown the man's journey of self-discovery that resulted from this negative situation. As change in self is either a bodily change or a change in character or personality the following texts can effectively portray change in self as they depict these things to the responder. 'In the Park' composed by Gwen Harwood, shows a woman's relisation that the choices she has made can not be changed and her reminiscing of her past stages of life. Another text composed by Gwen Harwood, "Prize Giving", as a man begins as dominating and then his power is lost when a young girl destroys his arrogance. 'Sturt's Dreaming' shows the responder, through juxtaposition, the differences between dreaming and reality. '10 things I hate about you' composed by Gil Junger shows through a modern adaptation of Shakespeare, shows change in the characters confidence and personality. Finally the text 'A prisoner's story' shows change in self as it depicts a man who discovers the power of remaining proactive. All of these texts effectively depict change in self to the responder through many different mediums. Miss, I need to fix up my 10 things I hate about you paragraph, there's heaps missing. I need to find more techniques and things like that. ...read more.