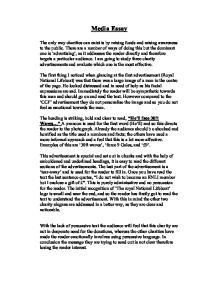 Media Essay The only way charities can exist is by raising funds and raising awareness to the public. There are a number of ways of doing this but the dominant one is 'advertising', as it addresses the reader directly and therefore targets a particular audience. I am going to study three charity advertisements and evaluate which one is the most effective. The first thing I noticed when glancing at the first advertisement (Royal National Lifeboat) was that there was a large image of a man in the centre of the page. He looked distressed and in need of help as his facial expressions are sad. Immediately the reader will be sympathetic towards this man and should go on and read the text. However compared to the 'CCF' advertisement they do not personalise the image and so you do not feel as emotional towards the man. The heading is striking, bold and clear to read, "He'll face 30ft Waves..." A pronoun is used for the first word (He'll) and so this directs the reader to the photograph. Already the audience should be shocked and horrified as the title used a numbers and facts; the others have used a more informal approach and a feel that this is a lot more affective. ...read more.

Similar to the CCF advertisement it gives the readers choices ('or') and this builds up possibilities, and therefore the reader does not feel trapped: "Or a train crash, or perhaps a personal tragedy". The charity is building up possibilities to the audience of what their money will go towards if they donate. The second heading is a plea to the reader, which suggests that they are in desperate need for the donation. Whereas the other do not, this piece of text ends in a signature, which gives a personal touch and also authority. The second half of the advertisement is used to inform the reader quickly, of what they want from you. The repetition of '�5' and the short sentences are so the audience does not forget what they have just read: "�5 could provide 18 people with course of life saving penicillin". Also at the start of each sentence the future verb 'could' is playing on the reader's emotions, so they feel some guilt about their lifestyle. The large pictures dotted around the page attract attention and are more emotional than words. The picture of the child makes the reader feel guilty. ...read more.

The sentence 'some will die' is designed to shock the reader and as it is a short sentence it has a dramatic impact. Although this is negative the next paragraph has a positive tone and so shows with the readers help, there is hope for these children. In the last paragraph the use of personal pronouns gives it a personal touch. The childs faces near the end are varied (some happy, some sad) and so the reader feels guilt but also is hopeful for the future if they donate. The CCF logo is very clear and recognisable, unlike the Royal National Lifeboat one. I feel that CCF have done a near perfection job of informing the audience about their charity, however there are a few things wrong with it. The border page is ineffective, the headings are unclear and the page is a little crammed. Apart from these points the use of personal pronouns and emotive language especially, this charity have done an affective job of informing the audience of their need for donations. In conclusion as reading through these advertisements the most effective advertisement I feel is written by the CCF charity. It varies the layout and changes the tone in the language, to create a read that will persuade and not bore the reader. Also the emotive language and pictures, personal pronouns ...read more.