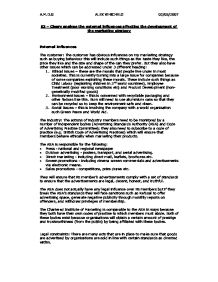 E3 - Cleary analyse the external influences affecting the development of the marketing strategy External Influences The customer: The customer has obvious influences on my marketing strategy such as buying behaviour this will include such things as the taste they like, the price they like and the size and shape of the can they prefer. But they also have other issues which can be addressed under 3 different heading: 1. Ethical issues - these are the morals that people live under in most societies. This is currently turning into a large issue for companies because of some companies exploiting these morals. These include such things as Child Labour (exploiting children in 3rd world countries), Employee Treatment (poor working conditions etc) and Product Development (non-genetically modified goods) 2. Environment issues - this is concerned with recyclable packaging and other factors like this. ...read more.

The ASA does not actually have any legal influence over its members but if they break the ASA's standards they will face sanctions such as Refusal to offer advertising space, generate negative publicity through monthly reports on offenders, and withdraw privileges of membership. The Chartered Institute of Marketing is comparable to the ASA in ways because they both have their own codes of practise to which members must abide. Both of these bodies exist because organisations will obtain a certain amount of prestige and trustworthiness (from the public) by being affiliated with these bodies. Legal constraints: There are many acts that are in place to make sure that goods are advertised by organisations are sold in line with certain standards as directed within. The Sale of Goods Act -This act ensures that goods provided are of 'merchantable quality'. ...read more.

The Broadcasting Act - This act is regulated by the Independent Television Commission. The Independent Television Commission (ITC) regulates the licensing of television commercials and undertakes to protect consumers interests. Their power comes from the Broadcasting Acts of 1990 and 1996 which allows the ITC to issue advertising licenses. The Competition Act - this act has two main functions: 1. The investigation of matters referred to it by the Director General of Fair Trading, in regard to the existence of monopolies, mergers, and disputes. 2. Hear appeals made against decisions made under the Competition Act in relation to mergers etc. The Office of Fair Trading - this is a government body which has been set up to ensure that anti-competitive behaviour is not allowed and that the interests of consumers and traders are protected. Even to the extent of recommending changes in laws where necessary to ensure a competitive and fair environment. A.M.D.G ALEX WHICHELO 02/05/2007 ...read more.