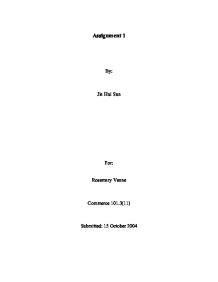 Assignment 1 By: Jia Hui Sun For: Rosemary Venne Commerce 101.3(11) Submitted: 15 October 2004 1. This essay is regarding the most famous soft drink in the world - Coca Cola. Coca Cola was invented by Dr. John Pemberton on May 1886. Pemberton mixed the combination of lime, cinnamon, coca leaves, and the seeds of a Brazilian shrub to make the beverage. As time goes by, Coca Cola company has already become the world's largest company and the leader of soft drink producers. Why the company did so successful over one hundred years? Besides the reason that the product is very tasty, another important reason is the company's marketing strategy. The 4 'P's (i.e. product, price, place, promotion) will be talked about as following. PRODUCT The Coca Cola Company has almost 400 brands of beverage. It markets four of the world's top five soft drink brands (Classic, Sprite etc). Consumers in nearly 200 countries enjoy The Coca Cola company's products every day. The original and the best sell brand is Classic. It probably is the most people's first choice. ...read more.

Coca Cola also donate a lot of many to charity and support Olympic game. The well-know Coke promotion is "Coca Cola Christmas", Coca Cola has a great "reprehensive" and considerable amount of Coke will be sold during that period. PLACE (DISTRIBUTION) Coca Cola Company manufactures beverage syrup and concentrates which then sell to a network of independently operated bottlers. For example, there is a bottler in Prince Alberta which is located in Saskatchewan. Some of the bottler independently owned, some of them are owned by The Coca Cola Company. Bottlers are responsible for producing, packaging and distributing the products to their territories. The method of the transportation usually is trucks. Trucks deliver products to intermediaries like retailer and restaurant. They also fill up the vending machine regularly which can be found all over the city. According to Figure 1, we can easily notice that some other soft drinks compete with coke classic. Although Coke classic takes big amount of market, other soft drinks also has big market share, such as Pepsi Cola, Mt.Dew, and so on. ...read more.

There will be more potential costumers for Coke classic. Coke classic still should be the major product for Coca Cola, and the formula will be remained, since some young customers have already have brand loyalty over 20 years with Coke classic. For example, Coke changed the formula in 1985; most people complain the "New Coke" is not as good as original one. The price of the Coke product may keep constant, even though the Coca Cola company will face inflation problem. In the mean time, the high-tech producing line should take over old one, and reduce the cost as low as possible, then, using cost-oriented pricing strategy. It will let Coke classic's price more competitive to appeal my target market. I will make the promotion in happy and peaceful style. Sports can also used in promotion, for example, young adults' favorite sport- hockey. With the increasing young adults' population, I will use intensive distribution, and put Coke classic into as many place connected with young adults as possible such as restaurant, bars, and postsecondary school, and so on. It is possible to gain more Market share. ...read more.