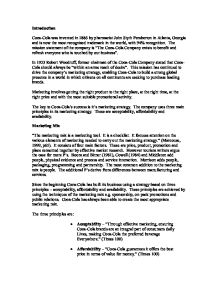 Introduction Coca-Cola was invented in 1886 by pharmacist John Styth Pemberton in Atlanta, Georgia and is now the most recognised trademark in the world, with 94% recognition. The mission statement of the company is "The Coca-Cola Company exists to benefit and refresh everyone who is touched by our business". In 1923 Robert Woodruff, former chairman of the Coca-Cola Company stated that Coca-Cola should always be "within an arms reach of desire". This mission has continued to drive the company's marketing strategy, enabling Coca-Cola to build a strong global presence in a world in which citizens on all continents are seeking to purchase leading brands. Marketing involves getting the right product to the right place, at the right time, at the right price and with the most suitable promotional activity. The key to Coca-Cola's success is it's marketing strategy. The company uses three main principles in its marketing strategy. These are acceptability, affordability and availability. Marketing Mix "The marketing mix is a marketing tool. It is a checklist. It focuses attention on the various elements of marketing needed to carry out the marketing strategy." (Marcouse, 1999, p65). It consists of four main factors. These are price, product, promotion and place cemented together by effective market research. However tourism writers argue the case for more P's. Boom and Bitner (1981), Cowell (1984) and Middleton add people, physical evidence and process and service interaction. Morrison adds people, packaging, programming and partnership. The most common addition to the marketing mix is people. The additional P's derive from differences between manufacturing and services. Since the beginning Coca-Cola has built its business using a strategy based on three principles - acceptability, affordability and availability. These principles are achieved by using the techniques of the marketing mix e.g. sponsorship, on-pack promotions and public relations. Coca-Cola has always been able to create the most appropriate marketing mix. The three principles are: * Acceptability - "Through effective marketing, ensuring Coca-Cola brands are an integral part of consumers daily Lives, making Coca-Cola the preferred beverage Everywhere." ...read more.

Coca-Cola believes in supporting the organizations that their customers care about. All around the world, their consumers are passionate about sports. That's why they have been involved with the Olympic Games since 1928, FIFA World Cup and also support hundreds of sports activities in local markets around the world. Sports and Coca-Cola is a great match. The sponsorships extend beyond the playing fields into other areas that captivate their consumers. (www.cocacola.com) Hundreds and thousands have learned their first skills through the foot ball development program which Coca-Cola sponsored from 1978-2002. In 2202 Coca-Cola joined with the English schools football association (ESFA) to launch the biggest under 13 Coca-Cola national schools tournament in Great Britain. Coca-Cola has been associated with the lawn tennis championships since 1975. In 1996 diet coke announced an exciting five year partnership as the official carbonated soft drink for the championships supported by advertising, PR and promotional campaigns. Since 2001 Coca-Cola continues to be the official supplier to the championships. (www.cocacola.co.uk) The Coca-Cola Foundation Coca-Cola has a foundation, the mission of the Foundation is to improve the quality of life in the community and enhance individual opportunity through education. They support educational programs primarily within three main areas: higher education, classroom teaching and learning, and international education. Their programs support scholarships for aspiring students; encourage and motivate young people to stay in school; and foster cultural understanding. Over the last ten years, the Foundation has contributed more than $124 million in support of education. (www.cocacola.com) Another project Coca-Cola is working on is one which the Company is supporting local HIV/AIDS prevention, education and treatment programs across all of Africa. Coca-Cola & Education The Coca-Cola Company has always believed that education is a powerful force in improving the quality of life and creating opportunity for people and their families around the world. The Coca-Cola Company is committed to helping people make their dreams come true. ...read more.

All of these elements clearly differentiate Coca-Cola as being the beverage supplier most likely to generate profits for retailers. The end consumers of Coke are the millions of people who consume soft drinks worldwide. Over many years, Coca-Cola has expanded its market horizontally in many countries, until there was virtually no place on earth where people could find a bottle or a can of Coke. Today this horizontal growth is almost total, with fewer than 20 countries still not using this product. What would make a thirsty customer leave a convenience store without buying a beverage? Coca-Cola believes that often it's because shoppers can't easily find what they are looking for. This is a finding from one of Coca Cola's recent studies. Researchers of the company studied consumers as well as their buying patterns. They found that teenagers were responsible for only 9.5 per cent of the total spending-a finding that surprised them. The heaviest users fell into a small segment of only 16 per cent of shoppers. (http://www.cokecce.com/srclib/8.0.html) They are those who visit convenience stores every day, including males and females. By introducing reward programmes they helped keep these shoppers loyal to their products. Medium users comprised mainly of females. They were the ones inclined to make impulsive purchases. Coke has been a success as it has been the first to introduce a bouquet of innovations. The company has achieved incredible momentum in a short time. By advertising, point-of-sale merchandising and product sampling, Coca-Cola has created a global awareness and product appeal for their trademarks. They have maximised the impact of advertising expenditure by assigning specific brands to individual advertising agencies. This has enabled the enhancement of each brand's position in the global market. In addition, it has increased the accountability and the efficient use of the company's marketing expenditure. After several years of turmoil, the company has ignited a strong brand and connected with its customers. It is indeed an organisation that is unique and one that has shaken the advertising industry by enabling consumers with the thrill of drinking Coke. ...read more.