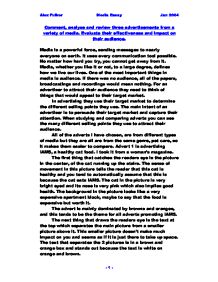 Comment, analyse and review three advertisements from a variety of media. Evaluate their effectiveness and impact on their audience.

Comment, analyse and review three advertisements from a variety of media. Evaluate their effectiveness and impact on their audience. Media is a powerful force, sending messages to nearly everyone on earth. It uses every communication tool possible. No matter how hard you try, you cannot get away from it. Media, whether you like it or not, to a large degree, defines how we live our lives. One of the most important things in media is audience. If there was no audience, all of the papers, broadcastings and recordings would mean nothing. For an advertiser to attract their audience they need to think of things that would appeal to their target market. In advertising they use their target market to determine the different selling points they use. The main intent of an advertiser is to persuade their target market and capture their attention. When studying and comparing adverts you can see the many different selling points they use to attract their audience. All of the adverts I have chosen, are from different types of media but they are all are from the same genre, pet care, so it makes them easier to compare. Advert 1 is advertising IAMS, a healthy cat food. ...read more.

It is in a big bold font and the word "love" is in a bigger font than the rest of it. The way the text is written it makes it seem like a lonely hearts advert. The text under the picture puts emphasis on a lot of important factors. They use a rhetorical question to start off the text, "Looking for love?", this makes you want to read on about how you can get this "love". The next thing they put emphasis on is "For just �1 a week," This is making the �1 seem like nothing, because of the use of the word "just". They also put lots of emphasis on the fact that, "they never destroy a healthy dog." In the last part of this text they write "unconditional love", they seem to have repeated the word love a lot in this advert to draw you in to wanting this love and wanting to sponsor. Although there is a lot of text, the way they have written the first few sentences it makes the reader want to read it all. At the very bottom of the advert there is a coupon to send off to sponsor a dog. ...read more.

You will also notice that not one of the kittens are at all dirty and all have perfect white coats. In the script it compares Catsan to other cat litters, and quote, "Compared to ordinary cat litter Catsan is three times more effective against odour." This is an opinion presented as a fact. By comparing their brand to "ordinary" brands they are in effect saying that their brand is the best. Because media is such a powerful force we are all influenced by it in different ways. All of these adverts manipulated me in some way maybe more than another person because I am an owner of cats. For people who don't own cats the advertisement will not have much of an influence on them as they have no need to buy it, although it might sway them towards getting a pet cat because of the way they present the kittens in the TV advert. Comparing all of these adverts you can see the different methods that advertisers use to persuade their audience to buy a product or a service. I think TV is a better form of advertising but it is very expensive for the advertiser. It is a better form because you see movement, sound and colour. It gets the message across easily and efficiently. Alex Fulker Media Essay Jan 2004 - 1 - ...read more.