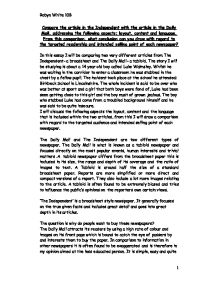 Compare the article in the Independent with the article in the Daily Mail, addressing the following aspects; layout, content and language. From this comparison, what conclusion can you draw with regard to the targeted readership and intended selling point

Compare the article in the Independent with the article in the Daily Mail, addressing the following aspects; layout, content and language. From this comparison, what conclusion can you draw with regard to the targeted readership and intended selling point of each newspaper? In this essay I will be comparing two very different articles from The Independent- a broadsheet and The Daily Mail- a tabloid. The story I will be studying is about a 14 year old boy called Luke Walmsley. Whilst he was waiting in the corridor to enter a classroom he was stabbed in the chest by a fellow pupil. The incident took place at the school he attended; Birkbeck School in Lincolnshire. The whole incident is said to be over who was better at sport and a girl that both boys were fond of, Luke had been seen getting close to this girl and the boy must of grown jealous. The boy who stabbed Luke had come from a troubled background himself and he was said to be quite insecure. I will discuss the following aspects the layout, content and the language that is included within the two articles, from this I will draw a comparison with regard to the targeted audience and intended selling point of each newspaper. The Daily Mail and The Independent are two different types of newspaper. The Daily Mail is what is known as a tabloid newspaper and focuses directly on the most popular events, human interests and trivial matters .A tabloid newspaper differs from the broadsheet paper this is included in its size, the range and depth of its coverage and the ratio of images to text. A Tabloid is around half the size of a standard broadsheet paper. Reports are more simplified or more direct and compact versions of a report. They also include a lot more images relating to the article. A tabloid is often found to be extremely biased and tries to influence the public's opinions on the reporters own certain views. ...read more.

Just because the article in the Daily Mail is based upon a factual event doesn't mean what they are writing is the truth they often use incorrect information e.g. it says he was stabbed in his leg and severed an artery but it was later shown he was actually stabbed in the chest. This was maybe used to make the story sound more dramatic, and is very often over exaggerated. There are a lot of interviews and surplus comments. These I found were not needed and sometimes irrelevant. For example family and close friends who weren't at the actual scene when it happened passed comments about their views and feelings about what had happened without knowing the full details. Only one person who was actually present at the time of the stabbing was interviewed so if she hated the boy who stabbed Luke, and liked Luke then it was a biased interview. At no point did I feel the boy who stabbed Luke was defended, but does a person like that deserve to be? Therefore the story is biased towards Luke. The language used in this paper is simple and the majority of the vocabulary is monosyllabic for simplicity and easier readability. This type of newspaper is aimed at the categories c1-e on the JICNAR scale. The less educated part of society would be expected to read this style of paper. This article also includes similar results from the past for example, Damilola Taylor. This shows that it isn't the first incident like this that has taken place and to show that there is violence around the country. It tells us that something needs to be done to stop these acts of violence in order to defend children, like Luke and Damilola weren't. On the front page the picture dominates the page with a small amount of writing - just enough to capture the readers interest and urges them to read on because not enough information is given. ...read more.

The stories are not written on facts or figures but on lies and extreme exaggeration. Although I prefer the Independent I believe it was quite controversial of it to broadcast murder and death on the front page. I thought that they would have put it on the inside, if not all of it at least a section of it, this would have been more respectful to the child and maybe privatised his death slightly. On the other hand this may not have been what people wanted as it may make the nation, maybe even the world realise the danger of knives, and the how the increase of violence is affecting the families of victims like Luke. It could also encourage parents to keep an eye on what their children are participating in and what they take to school and other places. It also identifies the fact that not only is it in the cities and urban areas that tragedies like this happen and people are murdered but it can happen at a school in the countryside to a child by their bully. Therefore I believe it veered away from its normal front page. In general the front page of the Independent would contain several stories which are continued on the inside of the newspaper. This was not the case in this situation; the front page only had one story featured on it which did not continue on the interior of the paper. This I thought was a good idea because this meant the reader got the full story without having to pause to find the rest of the article inside. Finally, I feel that the articles would have reached their target readership because both The Daily Mail and The Independent fulfilled their selling point and I feel that they kept to the tabloid and the broadsheet genres well. I think that each paper has been written appropriately for the audience that they were aiming the article at. 1 Tyrell close, buckingham, bucks, MK18 1EJ Robyn White 10B 1 ...read more.