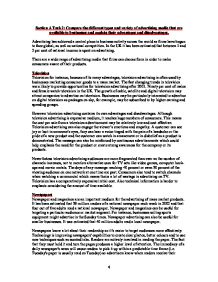 Compare the different types and variety of advertising media that are available to businesses and explain their advantages and disadvantages.

There has been an increase in the number of people listening to radio. This trend may be likely to continue with development of digital radio and internet radio stations. All type of businesses such as restaurants to Kleenex tissues, as well as smaller businesses, have found radio effective in reaching target customers. Radio messages are mobile. They can be heard at work, on the beach, in the shower, in the dentist's chair or even while shopping. Radio is an intrusive medium. A listener does not have to be actively involved in getting your message to hear it. Depending on availability, it's often possible to get an ad on a station on short notice. This allows advertisers to react to sudden developments, such as a retailer selling fans reacting to a heat wave or a competitor's special offer. A message can run with as much frequency as you choose (or the station's format allows). For example, you could run an ad once a day for a year or twice an hour for a day. Radio is mostly local in its appeal. You can tie your message into local events, weather, or locations to heighten the relevance of your message to the listener. Conversely radio has no visual impact. Companies don't use it to talk about a product that a listener may not already understand. Some ads use "the theater of the mind" very effectively to create pictures in a listener's head (for instance when you hear a pop the first thing that we think of is a bottle opening). ...read more.

One major advantage is that websites can be accessed by consumers all over the world, giving companies a worldwide market. Many companies now have their own websites to advertise products and some even allow customers to purchase online using credit cards. Internet advertising is relatively cost-effective; the costs can also be independent of the size of the audience. For example, a Web presence will cost the same regardless of how many viewers your site has. (Businesses will, however, need to make sure that Internet Service Provider can handle the volume of viewers they anticipate having.) Advertisers can target specific types of viewers by positioning an ad banner on related Web sites. For example, if you're targeting people seeking information on a specific topic, you can purchase ad space on Web pages that are related to this category in the major search engines. So, an organic herb farmer selling through mail order might advertise through the "organic foods" or "gourmet cooking" category. The indexing structure of these sites allows you to target your audience by geographic location and related interest area. Internet advertisers can potentially reach a global audience. Aside from language barriers, anyone at any location in the world can access information about a company's products or services. Nonetheless the popularity of the Internet is rising remarkably; it is difficult to gage the impact of advertising on the Internet. The range of costs to advertise on the Internet can vary greatly. It is best to compare a number of highly-frequented sites to determine the best way to spend your advertising money. ?? ?? ?? ?? 4 ...read more.