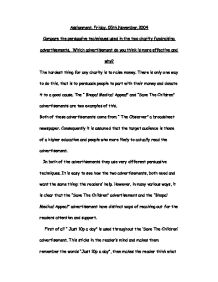 Compare the persuasive techniques used in the two charity fundraising advertisements. Which advertisement do you think is more effective and why?

Assignment. Friday, 05th,November,2004 Compare the persuasive techniques used in the two charity fundraising advertisements. Which advertisement do you think is more effective and why? The hardest thing for any charity is to raise money. There is only one way to do this, that is to persuade people to part with their money and donate it to a good cause. The " Bhopal Medical Appeal" and "Save The Children" advertisements are two examples of this. Both of these advertisements come from " The Observer" a broadsheet newspaper. Consequently it is assumed that the target audience is those of a higher education and people who more likely to actually read the advertisement. In both of the advertisements they use very different persuasive techniques. It is easy to see how the two advertisements, both need and want the same thing: the readers' help. However, in many various ways, it is clear that the "Save The Children" advertisement and the "Bhopal Medical Appeal" advertisement have distinct ways of reaching out for the readers attention and support. First of all " Just 10p a day" is used throughout the 'Save The Children' advertisement. This sticks in the reader's mind and makes them remember the words "Just 10p a day", then makes the reader think what their "10p a day" could do to help save children's lives. ...read more.